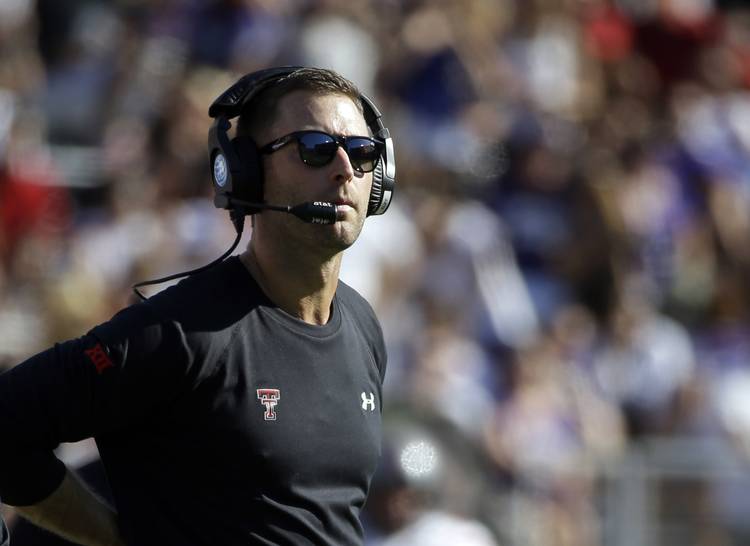 Texas Tech coach Kliff Kingsbury is facing some heat after a 3-5 start.

Each week of the football season, Bevo Beat will interview a reporter who covers Texas’ upcoming opponent. Will McKay, Texas Tech beat writer for RedRaiderSports.com, answered five questions about the Red Raiders. Follow him @Will_R_McKay. Saturday’s game kicks off at 6:30 p.m. in Lubbock.

A: An avalanche. How’s that? But seriously, things essentially snowballed on the Red Raiders. It was 24-17 at the end of a furious first quarter, and then Tech fumbled on its final two drives before the half. Follow that up with a fumble on Tech’s first kick return in the third, and things just got out of hand. QB Davis Webb leaving the game was a big part of it, too. TCU finally put its foot on the gas, and here we are.

Q: Are fans beginning to cool on Kliff Kingsbury?

A: I think there are definitely quite a few fans who are unhappy with how things are going this season, as many expected it to be a fun year where Tech could build quite a bit of momentum heading into a special 2015. The very opposite of that has happened, though, and with his recent big contract extension, many fans are unsure if he can get the job done.

The offenses in Lubbock have all been good for well over a decade, so I think many assumed things would keep on rolling this year. Inconsistencies at quarterback and outside receiver have been big issues, and I think it’s just hard for Tech fans to watch a team they don’t think can keep up in a shootout. It’s only year two of the Kingsbury era, however, so I think people need to remain patient. The Tech administration is going to let this thing play out over the next few years, so we’ll see what unfolds.

Q: How does the offense change under back up quarterback Patrick Mahomes? Do you expect him to start with Webb getting hurt last week?

A: Mahomes is obviously still a true freshman, so first and foremost, he naturally won’t have the same command or understanding of things that Webb does. Kingsbury will also likely limit the things he can audible in and out of.

As a player, he’s a good athlete that excels at extending the play. While he’s not the fastest guy in the world by any means, he understands pocket pressure very well, and he just has the natural instinct to know where to go with the ball, whether that be running or passing, on most plays. He’s a great improviser, and he has a good arm to go with it.

As far as play-calling, Kingsbury will go to more read-options, true options, and QB sneak and dive plays. Things will stay similar in the passing game, though.

Q: How much has the in-season resignation of defensive coordinator Matt Wallerstedt impacted that side of the ball?

A: With Mike Smith as the interim DC, and possibly the DC of the future, two things are most noticeable: His focus on simplifying the defensive playbook and getting back to fundamentals. Smith wants his players to think and react as little as possible. At times, it’s made the most noticeable dividends in run defense. Where players looked lost at times before, they seem to be in position in the running game the majority of the time now.

He’s also gone to more specific personnel packages based off situations and the oppositions personnel. He’s gone with base 3-4, base 4-3, a four man all-defensive end front, and other packages depending on what the opponent is doing, it’s been pretty effective at times, especially for outside linebacker Pete Robertson, who leads the Big 12 in sacks with nine.

Q: What must Tech do over these final four games to salvage its season?

A: If Tech were to beat one of Texas, OU, or Baylor in addition to Iowa State, I think it would really appease quite a few of the fans. While that still wouldn’t be the season that many were hoping for, I think people would be happy with that at this point.

Overall, though, I think the biggest thing they really want to see is simply improvement. Despite giving up 82 last week, the defense has shown quite a few signs of improvement, so people are pleased with the direction of that unit under Mike Smith and understand it’s just going to take more talent and depth for them to get significantly better.

The biggest issue lies with the offense. People keep waiting for a big game where they go bonkers, which hasn’t happened yet. It’s essentially been stuck in the same rut all year long, and turnovers have been a big, big problem. I think many would also like to see Tech run the ball more, as they have the best group of running backs and running game in general that they’ve had in a long time. It’s just been hard to run it when they’ve been down by two scores in quite a few games. But, a big day by the offense would be a big positive step forward, too.