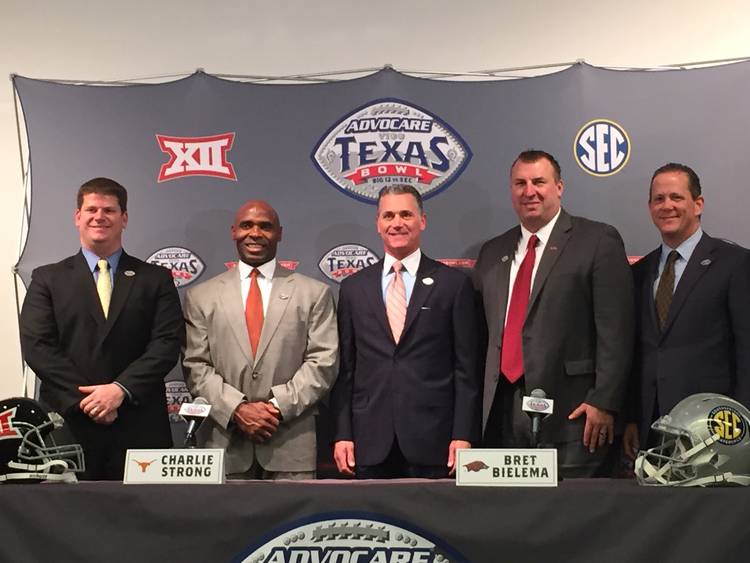 These next 15 practices and the Dec. 29 game against Arkansas may be critical for quarterback Tyrone Swoopes. The sophomore must prove that he’s gotten beyond his five-turnover performance against TCU and should be the front-runner going into the spring.

“I hope he’s been watching that tape wondering what the hell happened,” Strong said in the bowels of NRG Stadium after a Texas Bowl press conference.

“He just can’t turn the ball over,” Strong said. “He’s so hard on himself that it’s almost like you’ve got to get him out of the jar. You’ve got to come back, Tyrone. That was a really bad game.

“Whenever the stage is set, you have to go perform on that stage, and he didn’t perform that night,” he added. “Everything was in line. You had a national audience, You had a top-five team. You can’t turn the football over. That cannot happen.”

So does that mean Swoopes has Strong’s full support going into 2015? The answer is yes, but he immediately touched on the importance of recruiting.

“He’s got my full support,” Strong said. “The way we’re look at it right now, we’ve just got to go out and recruit and just go get better and make sure we develop what we have.”

After the TCU loss to end the regular season, quarterbacks coach Shawn Watson said none of the backups, including Jerrod Heard, were strong enough to push Swoopes for playing time.

As for whether the Longhorns would sign a junior college quarterback, Strong said, “It’s so hard to say right now, because we don’t know who’s going to transfer or what’s out there. But we just going to make sure we’ve got to build this program. We owe it to this university to get the right players in here.”