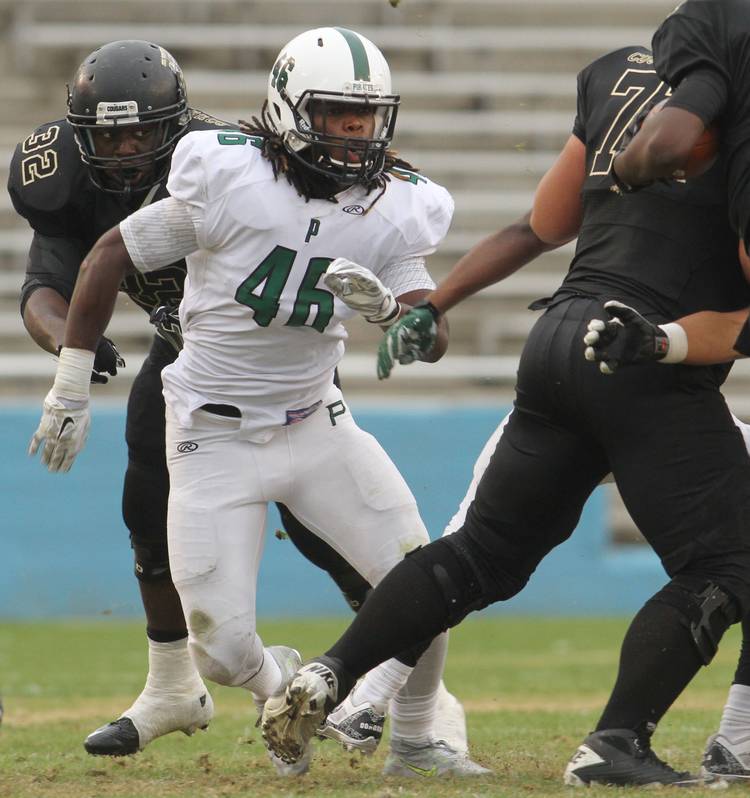 On Tuesday, the American-Statesman visited Mesquite Poteet High School to profile Malik Jefferson, the state’s top football recruit. If you missed it, here’s the link. Jefferson, a five-star outside linebacker, will announce his college decision at 7:45 a.m. Friday.

Here are some notes that didn’t make the story:

-Jefferson unveiled to me his three finalists but asked that I keep them in confidence until Thursday. No real surprises here. He’s choosing between Texas, A&M, and UCLA.

-Jefferson said he would have strongly considered Ohio State had the Buckeyes not backed out of his recruitment. OSU, which has commitments from three four-star linebackers, informed Jefferson that it was booked at his position.

-Jefferson said he really wanted to clarify Internet rumors that his girlfriend is going to A&M and that he might join her. Not true. Jefferson does not have a girlfriend. He dated a freshman at A&M for a short time but the two broke up before the football season. This is not award-winning journalism, but it’s noteworthy. And the kid was relieved to separate fact from fiction.

-Former Texas coach Mack Brown once sent Jefferson 100 letters in one day. A&M sent Jefferson 30 letters in decorated envelopes to open each day of the month. Jefferson didn’t open them. Too time consuming, he said. His garage is packed with college letters that he hopes to someday show his kids.

-Jefferson does not plan to inform coaches of his decision prior to Friday’s press conference. So Charlie Strong, Sumlin, and Jim Mora will be finding out at the same time everyone else does.

-Jefferson called Texas defensive coordinator Vance Bedford “a mean godfather.” “He’s strict. He’s like that mean godfather you have in your life. Not a bad thing. He’s a good coach. They all have good coaches.”

-Jefferson’s teammate, DeAndre McNeal, has Texas, A&M, and UCLA among his top five. Alabama and Texas Tech are in there as well. He and Jefferson made it clear they are not a package deal. McNeal said he’d like to get into acting, which bodes well for UCLA’s chances. Here’s one of several funny PSA videos McNeal and Jefferson filmed at school.

-Poteet’s principal, Karyn Cummings, who is close with Jefferson, said she expects him to pick an in-state school. As for me, I came away thinking the same thing. If I had to guess, Texas has a slight edge.