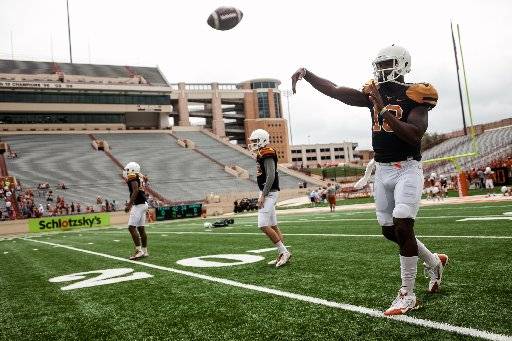 Both quarterbacks looked good. Not great. But good.

Texas’ new-look offense — the Longhorns are going to the spread — definitely is an intriguing scheme for this roster. Both Tyrone Swoopes and Jerrod Heard were able to make plays. The running backs not only produced a couple of nice runs, but had few of those 1- or 2-yard carries that seemed to show little imagination that we’ve seen the past couple of years.

It wasn’t the hurry-up attack that we see at Baylor and TCU, but maybe that’ll come later. There have been 15 practices this spring. What we got was a quick-flowing offense that seemed to highlight the quarterbacks’ abilities and the receivers’ athleticism.

The defense looked farther behind the offense. Some key players on that side missed the scrimmage because of injuries, however.

Saturday’s Orange-White scrimmage provided some hope for the fall. The offense, which easily could’ve struggled with its newness, looked pretty comfortable. The defense graded out as an incomplete, but Jefferson stood out and the front line was active.

OK, on to the specifics.

HOW DID THE QUARTERBACKS LOOK?

Swoopes struggled in last year’s Orange-White scrimmage, which carried over to last fall when he took over for David Ash in the second game. We’d heard that he had the attitude, if not the job security, of being the incumbent starter. It showed. He rarely looked rattled, though he certainly remains flawed.

His 14-yard touchdown around the right side was nice to see, but he wasn’t sharp as a passer. His first deep shot was overthrown, and he missed his receiver by a step or two. He threw behind Duke Catalon on a crossing pattern.

Still, good things tended to happen with him back there. Of his seven drives on the day, there were two touchdowns and two field goals. Three drives ended with punts.

Heard, as expected, looked super quick. He zipped up the middle on a draw for his 13-yard touchdown run. He looked sharper in the passing game than I expected him to be. He showed great chemistry with Ty Templin and Armanti Foreman.

But his drives were less efficient than Swoopes’. His eight drives produced one touchdown, two field goals, one punt, an interception, a Daje Johnson fumble, a turnover on downs, and a missed field goal.

They pretty much played only the first half, It it were a boxing match, my judge’s card would’ve given the first quarter to Heard and the second to Swoopes.

SPECIAL TEAMS: SPECIAL .. OR NOT SO MUCH?

Nothing to report on kick or punt returns. Nothing positive, anyway. Daje Johnson‘s fair catch on a punt ended up bouncing off his chest pad and was a fumble inside the 20-yard line.

THE FIRST PLAY: A Swoopes pass to an open Dorian Leonard, right past the line of scrimmage. Incomplete. Off Leonard’s hands.:

SPRINGING FORWARD: These guys helped themselves on Saturday.

Malik Jefferson: Um, not overhyped. Defensive coordinator Vance Bedford obviously was sand bagging the other day when he told us that Jefferson — last year’s No. 1 recruit in the state — still had a long way to go. The freshman linebacker looked every bit the five-star player he was advertised to be. His biggest play was a forced fumble on a big hit on a bubble screen play to Johnson.

John Bonney: He also stood out, forcing a bad pass on a cornerback blitz, making a nice open-field tackle and lighting up a fullback who caught a pass out of the backfield.

Edwin Freeman: Speaking of young linebackers, Freeman scooped up Johnson’s fumble that was caused by the Jefferson hit and returned it for a defensive touchdown.

D’Onta Foreman: Ran strong and showed a punishing burst. Also scored a touchdown. He looks like the No. 2 guy behind Johnathan Gray, who we didn’t see much of on Saturday.

Armanti Foreman: Made catches. Made plays. Texas, looking for a go-to replacement option with John Harris gone, will take that every Saturday.

FALLING BACK: These guys did not help themselves on Saturday.

Dorian Leonard: His dropped pass on the first play of the day was a sign of things to come. He dropped another Swoopes pass downfield a bit later. He committed a 15-yard unsportsmanlike conduct penalty. He couldn’t maintain possession of the ball on what would’ve been a long touchdown pass. Later, in the fourth quarter, another pass that should’ve been caught for a touchdown was broken up in the end zone — by a smaller defensive back.

Daje Johnson: Well, if he ends up in Charlie Strong‘s doghouse again, at least it’ll be for something done on the field and not off it. Not a good day for Johnson, who committed two turnovers on the bad fair catch and the big Jefferson hit. We like to use the word “playmaker” with him, but doesn’t he have to make plays for that to work?