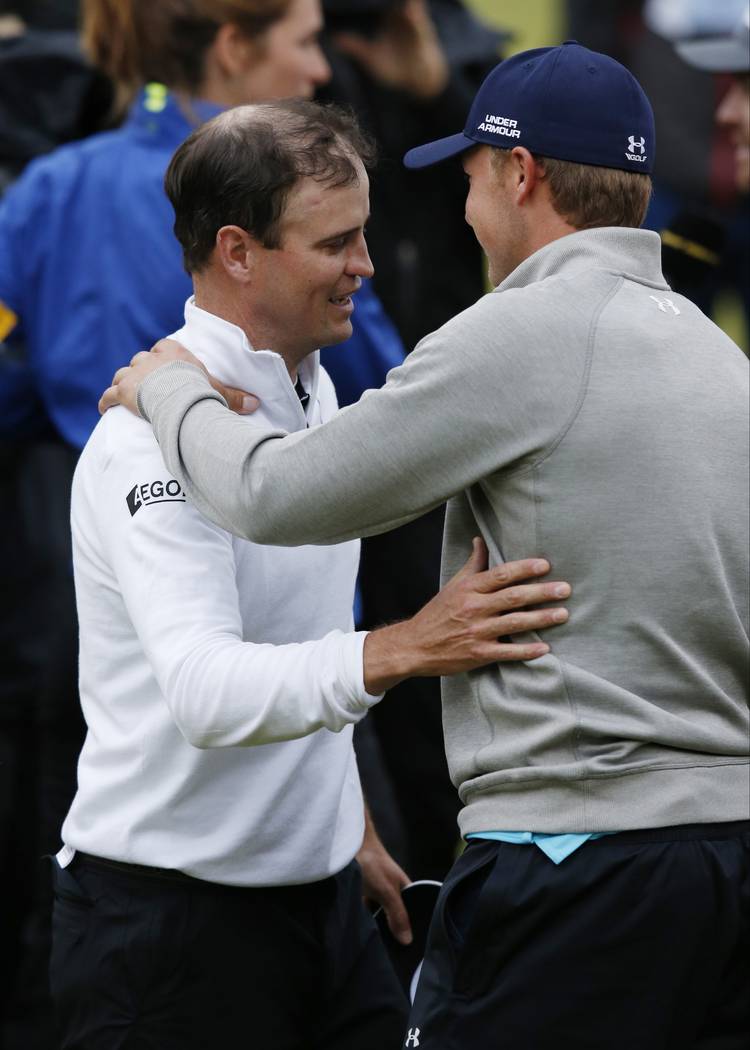 Zach Johnson, left, is congratulated by Jordan Spieth after winning a playoff after the final round of the British Open Golf Championship at the Old Course, St. Andrews, Scotland, Monday, July 20, 2015. (AP Photo/Jon Super)

When former Longhorn and golf wunderkind Jordan Spieth lost the British Open Monday, his historic bid for a Grand Slam slipped away.

But that didn’t stop Spieth from being the first one to hug and congratulate the winner, Zach Johnson.

Spieth, a die-hard Texas sport fan and the most buzzed-about rising young golf star, is again making headlines for his exemplary sportsmanship, as evidenced by photos of Spieth celebrating with Johnson on a plane home.

Click here to see the photos of Spieth drinking from the Claret Jug on Johnson’s caddy Damon Green’s Facebook.

In a Tuesday episode of “The Dan Patrick Show,” Johnson, who is 18 years older than Spieth, praised the young star and called him a good friend: “He was the guy most people probably wanted to have win and I get that too … He’s a better person, a better kid, off the golf course.”

Wow.. Almost. Nothing quite like @TheOpen at St Andrews. We fought hard. Very proud of a role model and friend of mine @ZachJohnsonPGA

“It doesn’t really surprise me because I know his character, but it does speak volumes to how he was raised and certainly how he conducts himself and how he puts the game in perspective,” Johnson said of Spieth, as transcribed by CBS Sports.

Spieth attended the University of Texas at Austin for one full year before leaving school to start his professional career during his sophomore year.