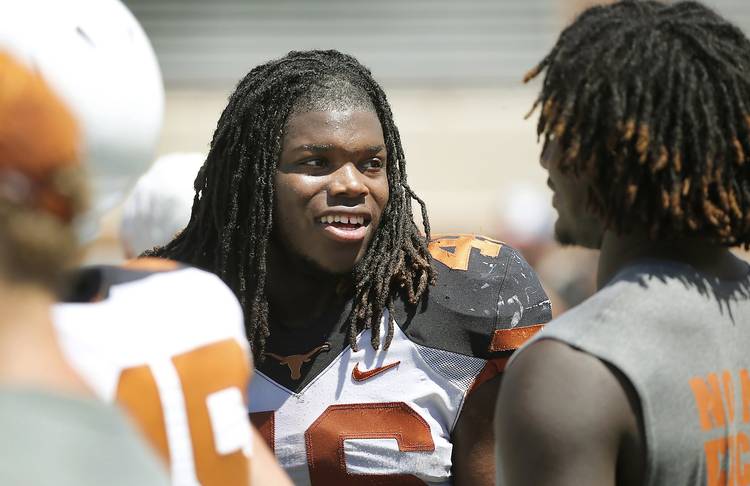 With just four days left until the Longhorns open their season at Notre Dame, five-star recruit Malik Jefferson might want to watch what he tweets about his “Texas Tough” coach Charlie Strong.

The freshman linebacker tweeted out an altered photo of coach Strong at a press conference standing on a stool to talk over the podium before him. The photo was accompanied by a playful jab: “He didn’t drink his milk”.

He didn't drink his milk pic.twitter.com/zVItO1nNpe

A cursory search on Google on the average height of men suggests 5 feet, 6 inches, which puts Strong on the right side of the bell curve, but not quite the towering presence as his players.

Before cornerback Quandre Diggs became a Detroit Lion, he tweeted last year that Strong often joked about his 5 feet, 9 inch stature despite being the same height.

Coach Strong always talking bout me being short but I'm the same height as him.. dude a funny lil fella!

Freshman offensive tackle Connor Williams offered up a warning to his fellow recruit that jokes might lead to more time on the practice field, tweeting “shots fired, be ready for a 5:00 wake up call”

@Official_MalikJ shots fired, be ready for a 5:00 wake up call😂😂

Jefferson replied he’d cry for real if that actually happened.

@Connorwi1liams man I would cry fr…

Luckily for Jefferson, Strong doesn’t keep an active Twitter account, last tweeting on July 28 that he “Got some exciting news for the future of the program! #LetsRide” referencing recruits the coach landed during the offseason.

Got some very exciting news for the future of the program! #LetsRide

The original tweet was both retweeted and favorited more than 1,000 times, so hopefully for Jefferson, no one’s shown the coach.