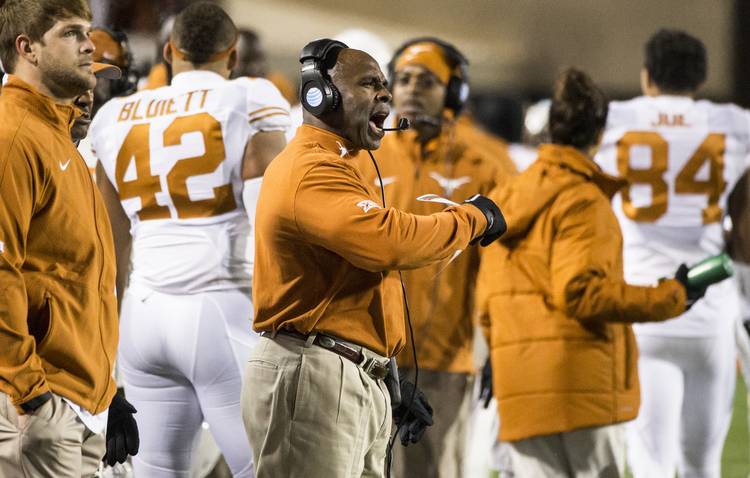 Every week, American-Statesman columnists Kirk Bohls and Cedric Golden answer questions over hot-button topics, including the Texas Longhorns, the Big 12 and the national picture.

Two of their questions for this week were about the Longhorns. Oh, and they’re also picking the final score — both have the Fighting Irish winning Saturday night:

IS CHARLIE STRONG ALREADY ON THE HOT SEAT?

Bohls: Absolutely not. Now it’ll warm up big time if he fails to show progress this season and fails to get Texas into a bowl game. Back-to-back losing seasons are no way to go through college life, and Notre Dame’s 31-17 win Saturday won’t help matters any.

Golden: Strong’s seat isn’t hot, but he needs a minimum of seven wins this season to guarantee things stay cool on his backside. Notre Dame won’t be the start he envisioned — the Irish will win, 30-20 — but the Horns will compete much better this year and finish up at a respectable 7-5.

HOW MANY SNAPS WILL JERROD HEARD PLAY IN SOUTH BEND?

Bohls: I’m betting on at least a dozen. Strong and Texas play-caller Shawn Watson remain entrenched in Tyrone Swoopes’ camp and will give him a long leash. But they need to incorporate the athletic backup into the game plan on a regular basis.

Golden: Ten snaps, which will be basically two series. Texas should go into every game with the idea of giving Heard 10 touches because of his big-play ability with his feet, and we all know this offense isn’t awash in proven playmakers.

Here’s a link to their full column.