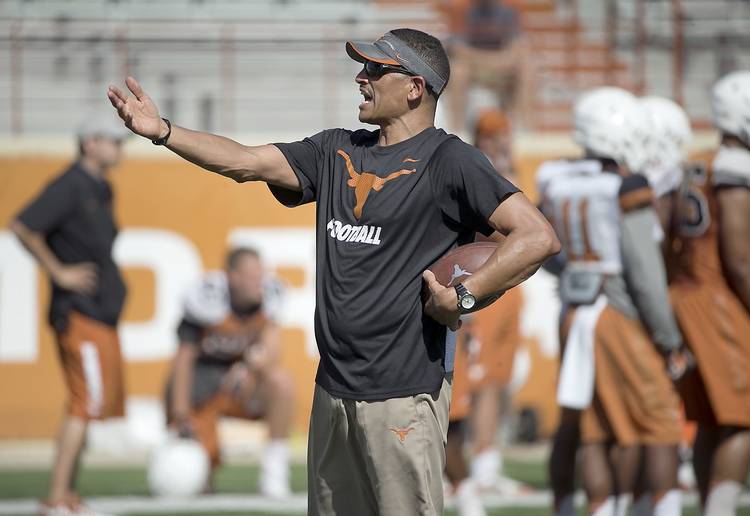 Every week, American-Statesman columnists Kirk Bohls and Cedric Golden answer questions over hot-button topics, including the Texas Longhorns, the Big 12 and the national picture.

Two of their questions for this week were about the Longhorns. Oh, and they’re also picking the final score — both have the Longhorns winning Saturday night:

WAS DEMOTING SHAWN WATSON THE RIGHT CALL FOR CHARLIE STRONG?

Bohls: Absolutely. He probably wishes he had pulled the trigger after last year’s bowl game so he could have hired a first-rate offensive coordinator to give him an entire offseason to prepare an offense for 2015. But Strong couldn’t wait much longer without risking losing the confidence of his own team and any credibility with the fan base. I assume there’s almost no chance Watson returns next year as quarterbacks coach.

Golden: Yes. But he could have saved a lot of time by doing it in the spring. There’s something to be said for loyalty, but switching now makes things dicey because Jerrod Heard could have had all spring to run the spread and get ready for this season.

IS JAY NORVELL THE ANSWER, AS TEXAS’ NEW PLAY-CALLER?

Bohls: Tricky question. He’s barely been an offensive coordinator anywhere other than in name only at Nebraska and Oklahoma. He called plays for part of the 2007 season at UCLA until head coach Karl Dorrell took over those duties himself to try to save his own job. Didn’t work. This is a pure stop-gap measure.

Golden: He’s the best answer they have. Watson’s stuff wasn’t working and Joe Wickline’s offensive line didn’t exactly produce a load of confidence in him as a play-caller, trial or no trial. Norvell has been around the spread for years. Hopefully he’ll make a little magic with Heard.

IS THIS TEXAS-RICE GAME A MUST-WIN?

Bohls: Yes. This is the biggest game in Strong’s very short time at Texas. Lose this one, and a 2-10 season is possible. If that happens, there would be talk of Strong not even surviving after two years, whether it’s fair or not. I expect to see the angriest Texas team in years and a thorough 34-17 Longhorns victory.

Golden: Does NASA employ geniuses? Of course, it’s a must-win. The Horns haven’t lost to the Owls since 1994, and to do so now would plunge this fan base into a state of chaos. Expect Texas to pound Johnathan Gray, the defense to actually show up and Heard to star in a 34-24 win.

Here’s a link to their full column.

What routine will Rice’s MOB cook up Saturday night?

No. 4 Longhorns sweep past UT-San Antonio