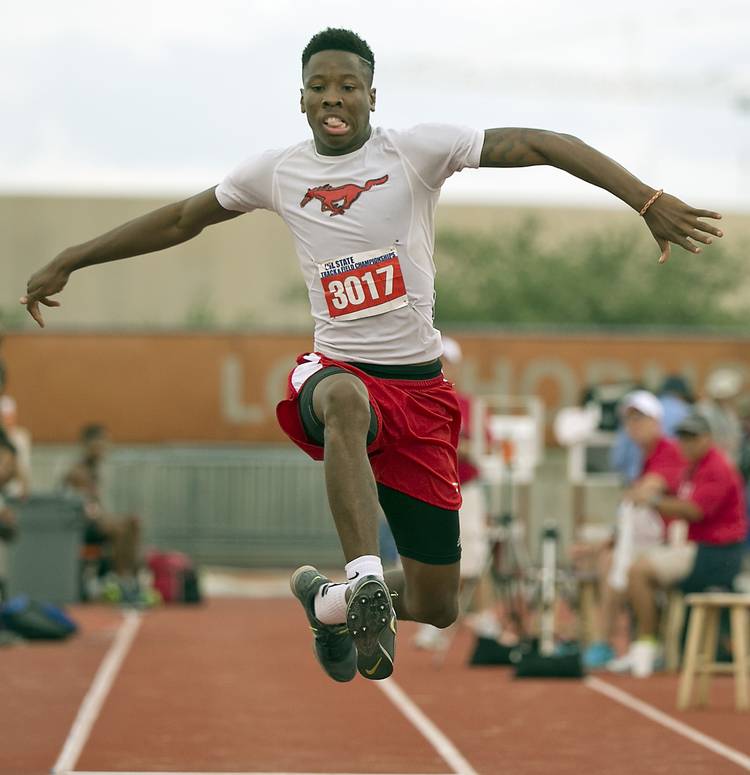 Kerwin Roach, from Galena Park North Shore, a UT basketball commitment, wins the Boys Class 6A Triple Jump. The 2015 UIL Track & Field State Championships is being held this weekend at Mike A. Myers Stadium on the UT campus with action continuing Friday May 15, 2016. RALPH BARRERA/ AMERICAN-STATESMAN

Kerwin Roach can jump. That may be the understatement of the year. The 6-foot-3 guard from Galena Park North Shore posted a video last night of him showing off his “ups.” The freshman leaps to the top of the backboard – a height of 13 feet, 3 feet higher than a regulation rim.

The feat may come as no surprise of fans who have watched his preps track career. Roach captured gold in the triple jump at last March’s Texas Relays with a personal-best distance of 50 feet, 8 inches. He was the only competitor at the Relays to clear 50 feet. He also captured the 6A state title in May with a leap of 50 feet, 6 1/4 inches.

Roach intends to play both sports at Texas. He committed to the Longhorns basketball team in October 2014. At the time Horns 247 considered Roach to be the seventh-best player in the state and the 21st-best shooting guard in the nation.

The video of the 13-foot high jump:

Them boys up to something they just not just bluffing🐰🐰 pic.twitter.com/SRYjH9Ca9x

Roach also shows his affinity for the standing back flip:

Heen even stretch tho 😎 pic.twitter.com/QILGjmx0PN

Questions, answers with Marcus Johnson on team psyche, luck and the difference between 1-3 and 3-1