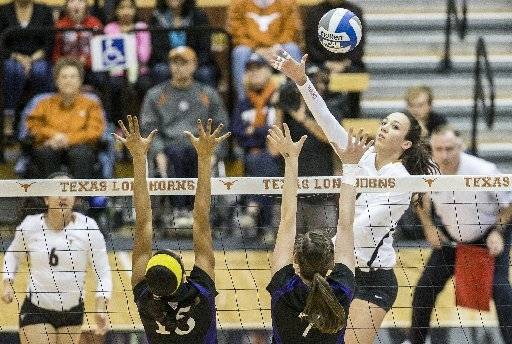 Texas senior Amy Neal had 20 kills as the Longhorns hit .331 for the match. It was the fifth straight match that Texas has hit above .300. Texas freshman Morgan Johnson led the Longhorns with a career-high hitting percentage of .833.

Oklahoma, which swept the Longhorns last season, went on a 4-2 run to take a 14-11 edge in the first set. Texas rallied to take the lead at 18-16, but a series of errors by Texas and solid hitting by the Sooners gave Oklahoma the first set.

Texas held the lead the entire third set, hitting .478, with seven kills from Neal and won it 25-13. Texas broke a 10-10 tie in the fourth set and stretched the lead to 18-13. The Sooners managed to get within three at 21-18, but Texas closed with four straight points to take the set and match.