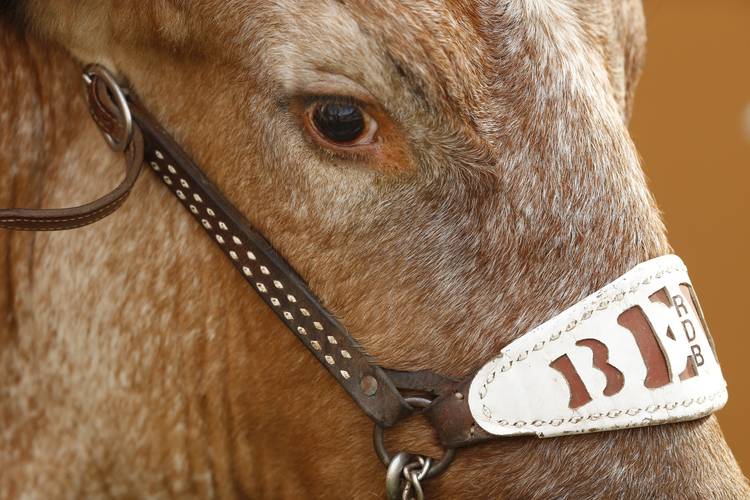 Bevo before the game against California at Royal-Memorial Stadium on Sept. 19, 2015. JAY JANNER / AMERICAN-STATESMAN

Beloved University of Texas mascot Bevo XIV has been diagnosed with bovine leukemia virus and is being retired immediately.

A preliminary diagnosis of the illness last week was confirmed by several of the state’s top veterinarians and his long-time vet Dr. John Tarlton. Bevo XIV, whose given name is Sunrise Studly, will rest comfortably on the ranch of John T. and Betty Baker, owners and caretakers of both Bevo XIV and his predecessor Bevo XIII.

“Bevo XIV truly embraced his role and loved engaging with people at games and special events,” said Ricky Brennes, executive director of the Silver Spurs and Bevo XIV’s regular traveling partner. “At his ranch, where he will continue to live, he was clearly the leader of the herd.”

The search for Bevo XV will begin immediately, and the new steer will be on the sidelines for the 2016 football season. The 2016 Thanksgiving game will be the 100th anniversary of Bevo’s first appearance at a Longhorns football game.

Bevo XIV bows out after Texas’ huge 24-17 upset of Oklahoma in the Red River Rivalry, although Bevo wasn’t able to travel to Dallas.

After beginning his tenure at age 2 in 2004, Bevo XIV was on the sidelines for many historic moments. He was part of back-to-back Rose Bowl victories, including the BCS national championship game in January 2006. He was also there for the BCS title game loss to Alabama in 2010 and a dramatic Fiesta Bowl victory over Ohio State in 2009.

Not only was Bevo XIV prominent on the sidelines, but he made numerous appearances at special events, including the second inauguration of President George W. Bush.

“Bevo XIV has served as part of a great tradition and was a rallying point for Longhorns fans,” said UT President Gregory L. Fenves. “We all have warm memories of him as he heads into retirement.”

The Silver Spurs and Bevo XIV assisted in providing nearly $250,000 over the last two years to support the Neighborhood Longhorns Program, an educational incentive for elementary and middle schools in Austin.

“Bevo is much more than a mascot. He brings joy to thousands of children, fans and alumni,”  said Howard Nirken, a founding member of the Silver Spurs Alumni Association and former UT student body president.