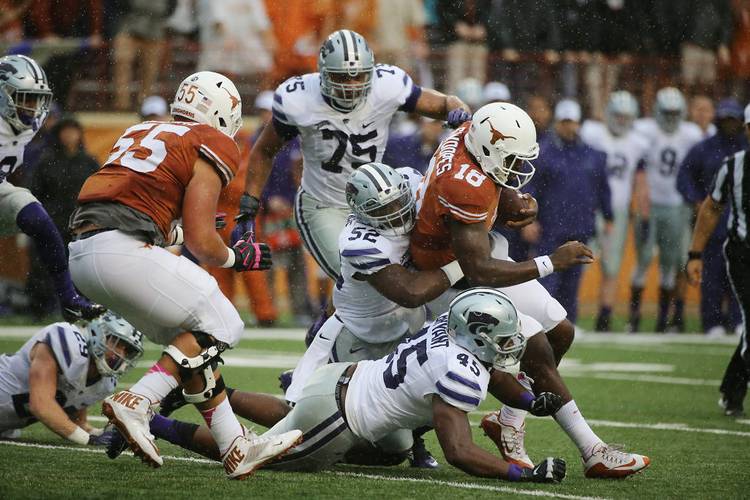 Texas QB #18 Tyrone Swoops is brought down during the first quarter of the UT game against Kansas State Saturday, October 24, 2015. Deborah Cannon/AMERICAN-STATESMAN

It wasn’t pretty — the weather was rainy, the crowd was sparse and the play was equally sloppy — but Texas has won its first back-to-back games since toppling West Virginia and Oklahoma State last November with a 23-9 win over always-tough Kansas State.

We wondered which Texas would show up — the one that physically controlled Oklahoma two weeks ago, the one that laid an egg in Fort Worth the game before that, or the one that played well but blew it late against Oklahoma State and Cal.

The answer? We got the Longhorns of Oct. 10 (Oklahoma), at least for the first half. Kansas State was held to six first downs, 64 rushing yards and converted only 2 of 6 third down chances. Texas, meanwhile, produced 221 yards of total offense, sparked by Johnathan Gray’s 89 rushing yards.

Still, it was only 16-6 at halftime. And though that lead was only 10 points, it didn’t feel that close. But the second half was another story, as Texas’ offense dipped. The defense, however, kept up its level of play.

“It was really a great team win, if you look at the conditions we battled through,” head coach Charlie Strong said. “We couldn’t really throw the ball, but we made some outstanding runs. We know we still have a lot to improve and get better. We have to go on the road and play well. It’s a one-game season.”

It took one play to force Kansas State quarterback Joe Hubener out of the game. Jason Hall’s big hit on Hubener’s first-down keeper ended up with Hubener on the Wildcats sideline, shaken up. He returned for the next series. Texas took advantage of a short field (thank you, 26-yard soggy punt) to give Nick Rose his 28-yard field goal.

The second quarter saw another long Texas drive (13 plays, 80 yards, 5:18 off the clock), a Tyrone Swoopes 18-Wheeler 1-yard touchdown — and K-State coach Bill Snyder take the second hardest hit of the game, when a Wildcats kick returner took the 76-year-old coach out on the sideline. Swoopes added his second short scoring run thanks to Johnathan Gray’s 46-yard run down to inside the 5. Rose missed the extra point (the snap went through his holder’s hands). The Wildcats got on the board in the final minute on Hubener’s short touchdown pass to Dominique Heath.

The third quarter was a back-and-forth of meandering drives and punts after punts. The Wildcats put up a field goal, but on the third down play right before it, Dylan Haines dropped what could’ve been a pick-six the other way. Still, the play prevented a first down catch inside the red zone.

The Wildcats looked like they were going to make it interesting in the fourth, powered by a couple of nice runs from Charles Jones. But Texas’ defense stiffened, and Hubener was knocked out for a critical fourth-and-long play on Texas’ half of the field. Two key developments — a big 29-yard run by Swoopes that set up the final touchdown, and a Haines interception that set it all up — put the game away.

Injury updates: Texas looked like it got through today unscathed. Right tackle Kent Perkins was back, as was Daje Johnson. For Kansas State, Hubener twice left the game — early in the first and late in the fourth. He returned both times. And thankfully, Wildcats coach Bill Snyder wasn’t listed on the injury report after that sideline hit he took on a kickoff return.

Game balls: Let’s give the offensive game ball to Swoopes, who continues to make the most of his 18 Wheeler package. Today, he averaged 7.1 yards per carry (7 for 50) and produced three touchdowns. On defense, it’s got to be Haines, who sealed the win with his big pick and nearly added two more interceptions.

Kansas State still holds the overall lead in this series, 9-7. Texas improves to 6-3 when the game is played in Austin.

Next up for Texas: At Iowa State next Saturday, 6 p.m. It’ll be televised on FS1, for those not making the road trip.