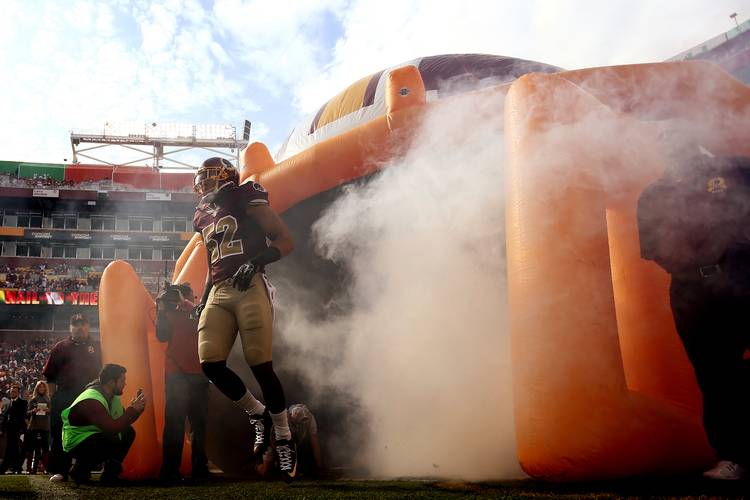 Keenan Robinson is second in tackles on his team. (Photo by Matt Hazlett/Getty Images)

Is there such a thing as a former Longhorn? These players will always be Longhorns to University of Texas fans, even though they’ve graduated to the next level of football. Every Tuesday, we’ll update you on how they performed the previous weekend. Here’s a look at the Longhorns in the NFL and how they fared in Week 7.

Earl Thomas, Seahawks safety—The All-Pro led the Seahawks in tackles in Thursday’s 20-3 win over the 49ers with seven, increasing his season total to 32.

Keenan Robinson, Redskins linebacker—He had seven tackles in Sunday’s comeback win over the Buccaneers, bringing his total to 48. That’s second best on the team.

Jordan Hicks, Eagles linebacker—Hicks continued his solid play for the Eagles, notching six tackles in Sunday night’s game. The rookie is tied for the team lead in tackles with 43. He also has a sack, an interception and three fumble recoveries.

Phil Dawson, 49ers kicker—Dawson was the lone scorer for the 49ers in Thursday’s loss as he connected on a 35-yard field goal.

Justin Tucker, Ravens kicker—He boomed nearly every kickoff through the end zone but only had the opportunity to kick one field goal. You bet he made it from 44 yards out.

Malcom Brown, Patriots defensive tackle—Brown earned his second start of the season and had three tackles in the Patriots’ 30-23 win over the Jets.

Kenny Vaccaro, Saints safety—Vaccaro filled the stat columns with his game on Sunday. He had five tackles, a sack, a tackle for loss and a pass defended.

Roy Miller, Jaguars defensive tackle—Miller had two tackles for loss in the Jaguars 34-31 win in London.

Brian Orakpo, Titans linebacker—He was third in tackles with five in Sunday’s 10-7 loss to the Falcons.

Fozzy Whittaker, Panthers running back—He was targeted just once in the passing game on an incomplete pass, but he had a kickoff return for 27 yards.

Tony Hills, Saints offensive tackle—He didn’t play in the Saints’ 27-21 win over the Colts as Terron Armstead returned to the lineup.

Brian Robison, Vikings defensive end—He logged a tackle and a QB hit in Sunday’s 28-19 win over the Lions.

Henry Melton, Buccaneers defensive tackle—He didn’t register a tackle but pressured Kirk Cousin’s all game, with three quarterback hits. Earlier in the week, Melton cashed in on a bet he made with teammate Gerald McCoy. With Melton’s Longhorns defeating McCoy’s Sooners three weeks ago, this was the result.

Jackson Jeffcoat, Redskins linebacker—He picked up two tackles and a forced fumble in Sunday’s win for his most productive day this season.