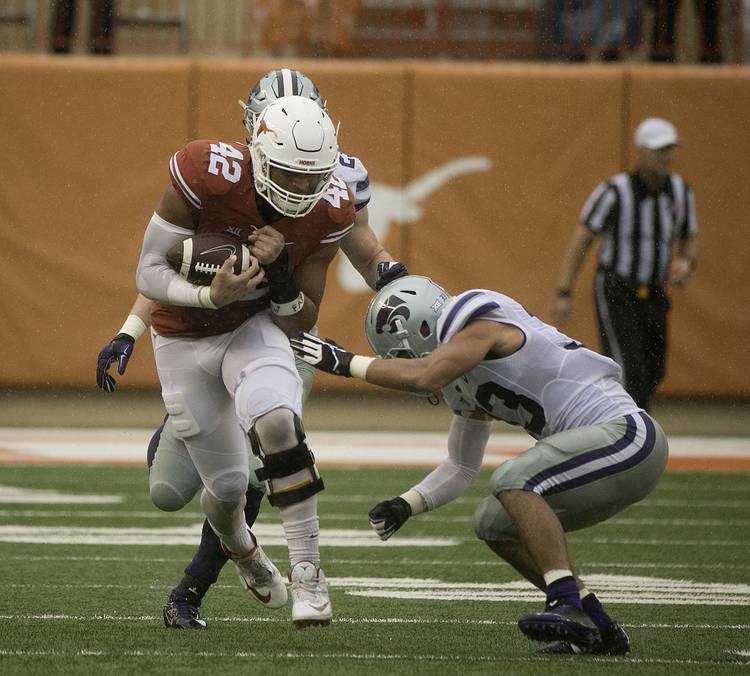 In today’s 9 Things, Kirk covers multiple Longhorn topics. Here are a few of them:

“Texas tight end Caleb Bluiett is the epitome of unselfishness. He might have caught one of the few downfield passes against Kansas State last week and been on the receiving end of a touchdown pass from Tyrone Swoopes against Oklahoma, but he still thinks of himself as a defensive end who was willing to move to offense because the team needed him there. “That’s where my heart belongs,” Bluiett said Monday. “I love beating quarterbacks. I hate quarterbacks. I love my own, but I hate all the others.” Then he kidded about Jerrod Heard and Tyrone Swoopes and said good-naturedly: “I always threaten ’em. Sometimes I’ll give ’em a little tap.” Bluiett was so versatile at Beaumont West Brook High School that he lined up at defensive end, wide receiver, linebacker and for one play at tight end, he said. He also deep-snapped and said, “I’ve been practicing it.” If teammate Kyle Ashby continues to struggle, maybe Bluiett could be Texas’ emergency deep snapper. I could see Bluiett land a job in the NFL someday.”

On UT men’s hoops playing a home game at Gregory Gym in the future:

“I don’t think Texas will ever stage another regular-season basketball game in Gregory Gym, but its scrimmage there was such a hit with fans, new coach Shaka Smart might want to explore a nonconference game at the cozy old arena as a novelty act.”

On the defining play of Charlie Strong’s 20-game tenure as head coach:

“Interesting that the defining moment of the Charlie Strong era at Texas so far has been basically a run by a wide receiver. Officially, Marcus Johnson’s 24-yard touchdown against Oklahoma was ruled a pass with the short pitch from Heard, but that was the standout play of Strong’s time because it set the tone for Texas’ win over OU and represented the physical style of play that Strong wants.”