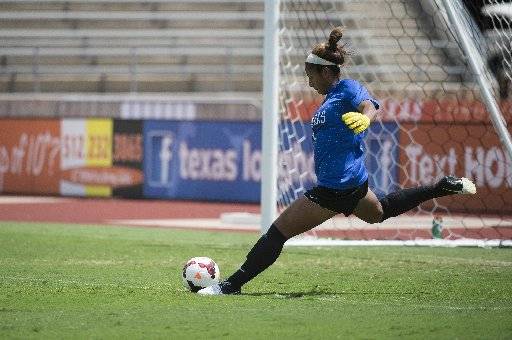 Smith made the first team while Adams was selected to the second team and the all-freshman team along with Flores.

Smith earned first team honors after leading the conference with 94 saves and a league-best .855 save percentage. The senior from Plano, was also named Big 12 defensive player of the week on Monday. Smith broke Texas-ex Dianna Pfenninger’s career shutout record with a 3-0 blanking of Montana in the Longhorns’ regular season finale on Friday.

Adams has a team-high six goals, four assists and knocked in three match-winning strikes this season. The Lancaster, California, native leads all Big 12 freshman with 16 total points. She was named Big 12 offensive player of the week on Monday after scoring a goal and adding an assist against Montana.  Adams has scored at least one point in six straight matches, a streak that ranks second in program history.

Flores, who sat out the 2014 season with an ACL injury, ranks second on the team with nine points on three goals and three assists. She has notched five points in Texas’ past six matches.

The trio will return to action on Wednesday in the Big 12 tournament quarterfinals against six-seed Kansas at 8 p.m. in Kansas City, Missouri.

Longhorns chat with Brian Davis and Ryan Autullo at 11 a.m.