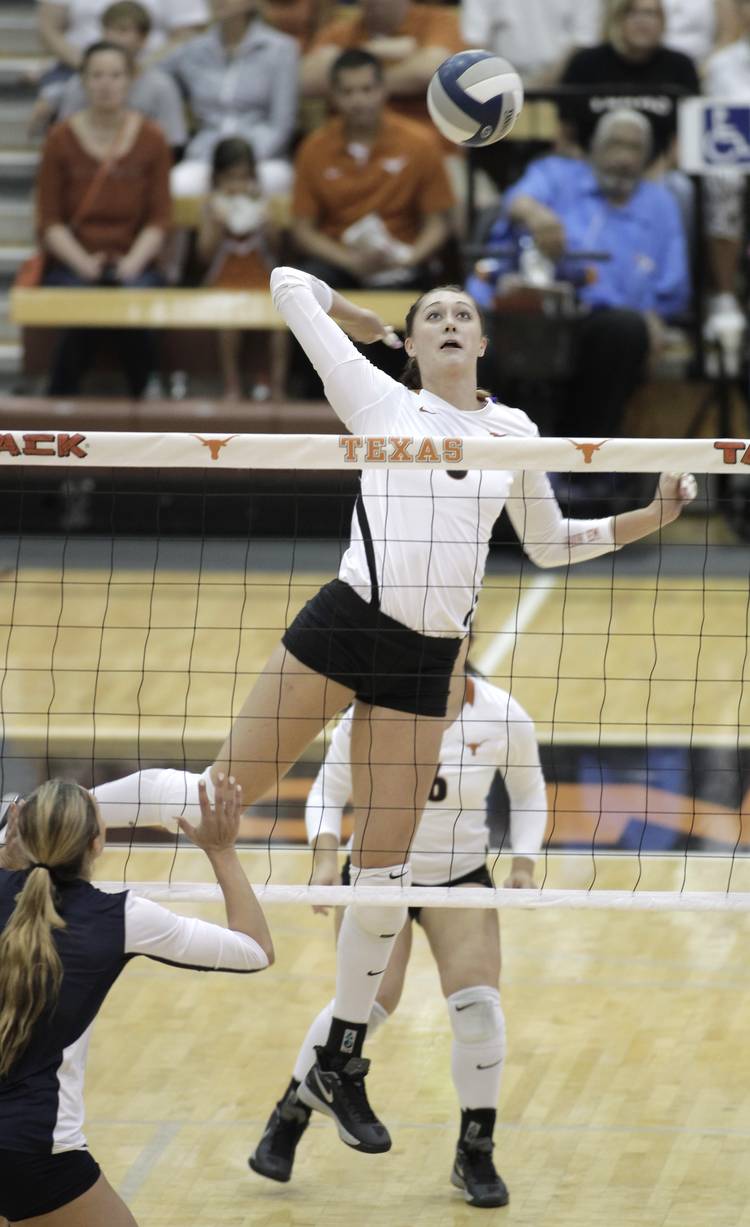 It took awhile for the second-ranked Longhorns to find themselves Thursday night — two sets, to be exact — but they eventually took control and put the finishing touches on a three-set victory (25-14-25-21, 25-9) at Gregory Gym.

Early on Texas couldn’t separate from the West Virginia Mountaineers, which entered the matchup without a win in the Big 12 conference. The first two sets went in the Longhorns’ favor, regardless.

The Mountaineers hung around in the first set and then let a 15-13 lead escape in the second set before Texas found its rhythm.

“Offensively, our numbers were good,” said head coach Jerritt Elliott. “We gave them easy outs. They know that. Tonight we struggled blocking the outside hitters tremendously, block timing and block positioning.”

West Virginia’s outside hitters took advantage of a Longhorns unit struggling to time the blocks.

Texas’ offense, which only committed four errors in the match, made up for the deficiency on defense.

“For us, it was just communicating and talking to our ring blockers and getting good touches for our defense,” said Molly McCage, who tallied eight kills on eight attempts in the win.

Eventually Texas settled in and West Virginia’s offense couldn’t compensate. The Mountaineers (5-16, 0-8 Big 12) committed eight errors in the third set, finishing with a .174 hitting percentage in the match.

“I like it,” Elliott said. “When we are in that position, we are tough to beat.”

Following a three-set loss to TCU last week, Texas has reeled off two consecutive victories heading into a matchup with the eighth-ranked Kansas Jayhawks. Sixteen of Texas’ 19 victories this year have only required three sets.

With the possibility of a letdown looming, Elliott entrusted his team to respond with the proper mindset to defeat the Mountaineers. In the last three matchups, Texas has outscored West Virginia 225-148.

“I don’t lose sleepless nights wondering if they’ll be prepared,” Elliott said. “The key is how do you get your team to be good night in and night out and respect every opponent? I thought tonight we did a nice job of that.”

Texas’ loss to TCU created a heightened sense of urgency. Elliott said he couldn’t have picked better timing for the loss, as the team looks to close out the season at the top of the conference. It was a much-needed wake-up call for a Longhorns team eyeing its second national championship in four years.

Even with a high-profile opponent on the slate, Texas will not deviate from its normal routine that has gotten them to a 20-2 (10-1 Big 12) record this season.

In the last meeting, Texas swept the Jayhawks at home in what Elliott called the team’s best performance of the season.

The challenge is to replicate the performance in a hostile environment, with the top spot of the Big 12 conference at stake.

“That’s what this program is made of, being in those environments and playing at a high level,” Elliott said. “That’s what you expect from great teams.”