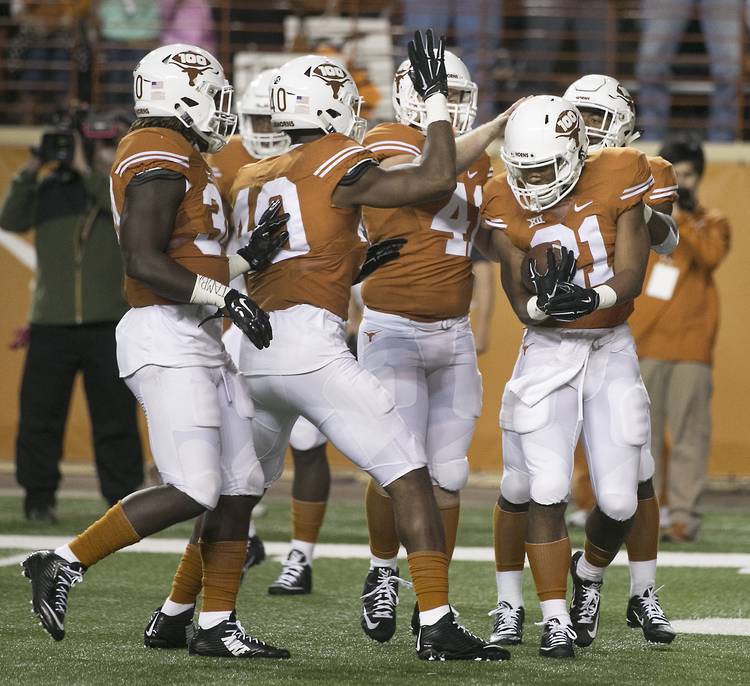 On a night when Texas went old school to honor the former Longhorns star, the 59-20 win over Big 12 cellar dweller Kansas looked like it was straight out of 1969 as well.

In advance of the “My All-American” movie about Steinmark, Texas rededicated the Royal-Memorial Stadium scoreboard to him. The Longhorns shelved their metallic Longhorn logo helmets in favor of the old “100” logo with the burnt-orange Longhorn. Texas’ jerseys didn’t sport last names on the back nor “TEXAS” on the front — more old school. The Horns even wore black shoes. And interim AD Mike Perrin was spotted wearing a No. 28 Steinmark jersey.

(The Nike swoosh, of course, was still there on the Texas jerseys.)

This was the kind of performance most were looking for last week in Ames, Iowa, since Iowa State — like Kansas — has really struggled this season. The Jayhawks rank dead last in the nation in total defense, and are second to last in passing defense. And Kansas hasn’t won a Big 12 game since the 2012 season.

Texas (4-5, 3-3) delivered. Offensively, Jerrod Heard was 13 of 23 for 201 yards — breaking his streak of four straight sub-100 yard games — while Tyrone Swoopes produced five touchdowns (four runs, one pass) and D’Onta Foreman rushed for 157 yards and two touchdowns. The Longhorns had 598 yards of total offense, had perfect balance (299 rushing yards, 299 passing yards), and had one 100-yard receiver. Even Trey Holtz, the backup to the backup to the backup quarterback, got into the game. Defensively, Texas had four turnovers, six sacks (for the third time in four games) and held Kansas to a 9-of-20 success rate in converting third downs.

It didn’t take Texas long to get on the scoreboard. One play, in fact. Heard’s play-action pass to John Burt turned out to be an 84-yard bomb — the second-longest TD pass ever thrown by a Longhorns freshman and the third-longest TD catch by a UT freshman. Nick Rose added a field goal, and then Dylan Haines picked off a Ryan Willis pass and returned it 36 yards down to KU’s 4. Swoopes finished it off for the touchdown and a 17-0 lead.

The second quarter began with more mistakes by Kansas. A Michael Dickson punt was muffed by KU returner Derrick Neal, and Kirk Johnson pounced on it at Kansas’ 17. Swoopes punched in his second 1-yard score of the night to make it 24-7. The Jayhawks answered on De’Andre Mann’s 1-yard TD run, though the drive could’ve ended with two interceptions that were dropped (Davante Davis, Holton Hill). Kansas nearly made it a 24-21 game with 6 minutes left in the half when Mann’s fourth-and-goal carry ended up in the end zone, and the fumble was recovered by KU’s Ben Johnson. But the rulebook says on a fourth down fumble, only the ball carrier can recover his own fumble. So Texas took over at its own 1, with a 24-14 lead.

Texas led at halftime, 24-14. But it easily could’ve been a 24-24 tie when you consider KU’s last-second field goal attempt of the first half boinked off the goal post and the Jayhawks’ endzone fumble recovery was taken away by the rulebook.

Still, there were two important trends to watch: Under Charlie Strong, Texas was 9-1 when it scores first and 8-2 when leading at halftime. Both trends skewed Texas’ way in this game.

(Now those numbers improve to 10-1 when scoring first, 9-2 when leading at halftime).

Texas took a 38-14 lead into the fourth. The Longhorns rushed for 148 yards in the third.

Swoopes, who replaced Heard at quarterback with the game out of reach, produced his fourth touchdown of the night early in the fourth on a 44-yard run. That made it 52-14 — the first time since the 2013 season opener against New Mexico State that the Longhorns have scored 50 or more points in a game. Swoopes added a 10-yard score after recovering a fumble by Kirk Johnson.

Injury updates: Malik Jefferson missed most of the first half due to illness, we were told. But he played the second half.

On deck: Texas heads to Morgantown, W.V. to face West Virginia on Saturday. The kickoff time and TV network haven’t been announced yet. The Mountaineers (4-4, 1-4) knocked off Texas Tech at home on Saturday, 31-26.