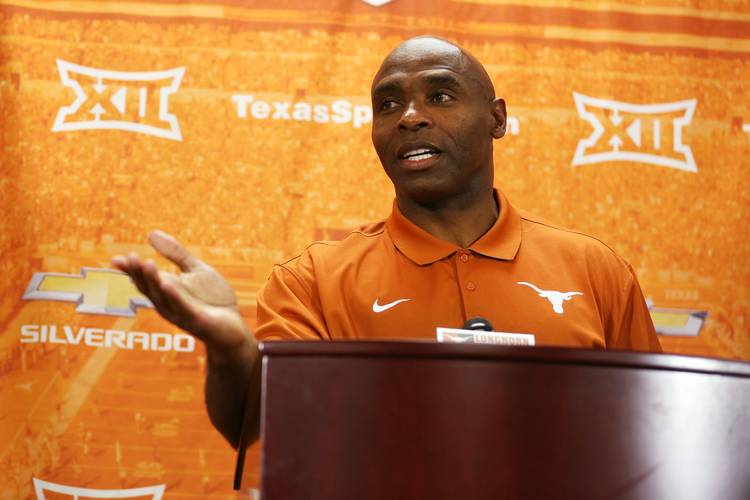 Charlie Strong’s West Virginia press conference has come and gone, and there were two words that dominated the 30 minutes of questions:

Under Strong, the Longhorns are 4-6 in games played away from Royal-Memorial Stadium. Texas has won two of its last three against West Virginia, but two of those have been nailbiter games — 47-40 Longhorns in overtime in 2013, and 48-45 Mountaineers in 2012.

On to the questions and answers …

On whether Strong is talking bowls with players: “We have to get our seniors to a bowl game. It’s critical now, with three left and you’ve gotta win two. They understand.”

On Texas’ recent bad history with road trips: “Our guys do understand how important it is, but I do know this: If you need to change anything, it’s just the buildup. We go beat Kansas State, and for some reason you go into Iowa State, you expect to play well and we don’t play well there. Last night, we didn’t have to say much. They were locked in and focused. They know how big this game is.”

On how to approach this road game: “When you’re dealing with a young team, you can’t build them up. I think a lot of times they start believing that, they start listening to it. Listen, guys, let’s just go get the next one. On Sunday, I didn’t even show them (Kansas) highlights. I said hey folks, our focus is on West Virginia.”

On whether Texas can hang with WVU in a shootout: “We can score the points we scored the other night, I think we can play a shootout. We’re going to have to be productive on offense, but defensively we’re going to have to eliminate the big plays. Make them earn everything. In their last game against Tech, they rushed over 50 times. So they want to establish the run. We just can’t let them play-action pass and throw the ball deep downfield.”

On why Johnathan Gray keeps starting over D’Onta Foreman: “We don’t count the number of touches. The other night, (Gray) ran it seven times and the big man (Foreman) ran it 12. Both are excellent backs. The thing about J-Gray is the leadership he proves.”

On keeping the young guys focused: “Some of the guys who are seniors still act like freshmen. It’s about staying focused, staying locked in. A lot of (the freshmen) have grown up, but you’re still dealing with a lot of newer (players) who are not starters that you need to stay on top of.”

On whether this team reeeally understands how critical this game is: “They’ve heard about it so much. With each game, we haven’t played well on the road, but even then, we’ve dropped two at home. It’s about playing well in all three phases. We need to get off to a good start, and we need the quarterback to play well.”

On how to ensure a fast start: “You’d like to start off like the other night, throw the ball down the field, let Burt go get it. Anytime you’re on the road, you need to establish the run and get first downs. You go take the thrown downfield, but you have to move the ball. It can’t be one of those three-and-outs. Once you create first downs, it’s going to lead to touchdowns.”

On what he likes the most about this offense — and what concerns him the most: “There’s always concerns. When you don’t move the ball and don’t score points, that’s always a concern for you. As long as our quarterback and our team improves. Just run the football. We’re a physical team and come off the ball with two backs. You can run the football and be physical at the point of attack.”

Texas-Baylor kickoff: The regular-season finale at Baylor on Dec. 5 will kick off at 11 a.m. It’ll be either on ABC or ESPN.

Saturday’s game kicks off at 11 a.m. It’ll be Texas’ fourth 11 a.m. kickoff so far this season. For you TV watchers, it’ll be on ESPNU.

The only four Texas-WVU matchups: