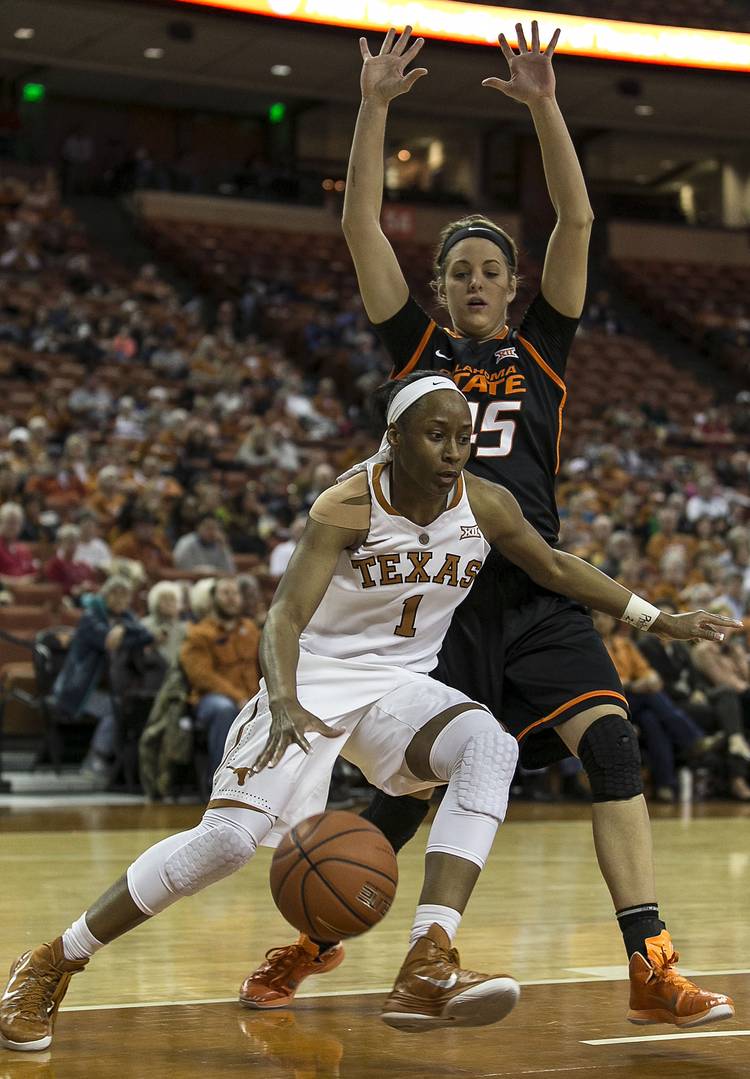 FEBRUARY 25, 2015 - Texas Empress Davenport drives the base line against Oklahoma State Katelyn Loecker during the first half of NCAA basketball game on Wednesday, Feb. 25, 2015 in Austin, Texas. (RODOLFO GONZALEZ / AMERICAN-STATESMAN)

Seniors Brady Sanders and Empress Davenport lead a talented and deep group of guards. Sophomore Brooke McCarty emerged as the top best three-point shooter last season. Depth and experience will be provided by junior Brianna Taylor, senior Celina Rodrigo and sophomore Tasia Foman. Lashann Higgs, a McDonald’s All-American while at Cedar Ridge High School, is one of the most decorated freshmen in the country.

Sophomore Ariel Atkins, who can play guard or forward, led the Longhorns in Big 12 scoring last year, averaging 10.4 ppg. One newcomer to watch is Jordan Hosey, a consensus All-American at Manvel High. In four seasons she helped Manvel go 133-17, including a Class 6A state championship. Sara Hattis, a 6-4 junior, appears to be one of the team’s most improved players. Freshman Olamide Aborowa, a native of Lagos, Nigeria, ranked as the No. 77 recruit in the country by ESPN.

Texas has one of the best post tandems in the country with 6-7 senior Imani Boyette (former McGee-Stafford) and 6-5 junior Kelsey Lang. Boyette was a beast in the Big 12 and NCAA Tournaments, but started only eight games all year while battling injuries. Lang, the returning leader in scoring (10.6 ppg. last year), started in 31 of 35 games as a sophomore. Sophomore Diani Akigbogun of Aurora, Colo., will miss the early part of the season while recuperating from an injury.