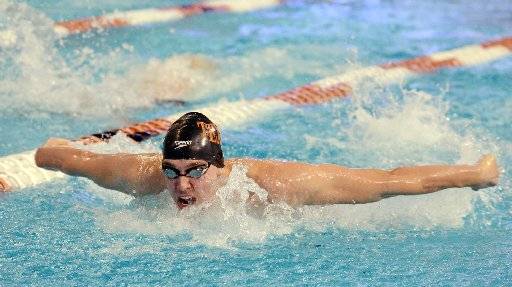 The Texas men’s and women’s swimming and diving teams closed their East Coast road trip with victories against North Carolina State on Saturday in Raleigh, N.C.

The top-ranked Texas men’s team followed Friday’s 160-132 victory over 12th-ranked North Carolina with a 154-136 win against the fifth-ranked Wolfpack.

The Texas women’s team bounced back from a loss to second-ranked North Carolina by defeating No. 7 N.C. State, 160-140. Texas won seven events.

Longhorn Madisyn Cox won two events, giving her five victories over the past two meets. Cox won the 200-yard freestyle and the 500 freestyle against the Wolfpack. She also took the 200 freestyle, 200 breaststroke and 400 individual medley against the Tar Heels on Friday.

Joesph Schooling posted the top collegiate time this season in the 200 butterfly at 1 minute, 43.76 seconds and Clark Smith topped N.C. State’s Anton Ipsen in the 500 freestyle.