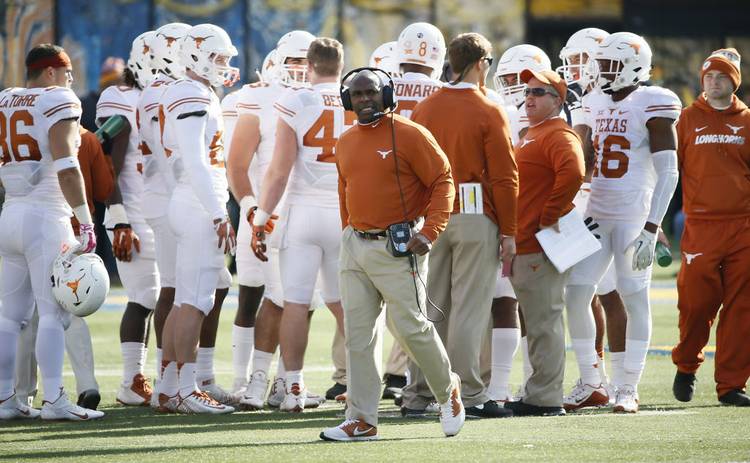 In order of importance:

(1) The running game — which will be a huge key Thursday night — very well could come down to relying on third-string Chris Warren running behind a line without right guard Patrick Vahe. D’Onta Foreman (broken pinky finger) had surgery last week “and right now, I would say he would not play on Thursday,” Strong said. And Johnathan Gray is hurt too — possibly turf toe — and it depends on “what happens here up until Thursday.”

(2) After whiffing a couple of times by not giving a definitive, don’t-listen-to-the-national-media rumors answer, Strong directly addressed the rumors that he might be looking elsewhere, including Miami: “I told our players: I am not going anywhere. We’re going to see this through. I’m here and I’m here for the duration.”

So, there’s that. He was also asked about his relationship with interim AD Mike Perrin — “Mike is an unbelievable person and is going to do a great job. … He understands the football side of it.” — and was later asked whether he’d been bothered about all the rumors.

“I don’t run from anything,” he said. “When you work so hard to place yourself in this position, nothing’s ever tough. You grind it out. I always talk to our players about hanging in there, that it may not be the way you want it to be, but so what? You hang in there. We didn’t do a good job of coaching; if we did a better job of coaching, we wouldn’t be in this position.”

On stopping Texas Tech’s offense: “What’s key for us is on defense, not to give up home runs. And they’re a big-play team. We’ve got to corral the ball and when we go hit, we’ve got to put them down on the ground. We’re going to have to pursue and not give up the big play.”

On whether the Longhorns understand the urgency of these last two games: “There’s no reason for them not to understand that. But they do understand how important these next two games are, but we’ve gotta take this one first and then go get the next one.”

On Chris Warren: “The whole season, Warren hasn’t had the carries the other two have had. This’ll be the game for him to step out and get those carries. I feel very comfortable with Chris Warren. He’ll take advantage of this opportunity.”

On Daje Johnson’s journey: “I was telling him the other day, I’m so proud of you and so happy. You have come a million miles. The first day I took this job, he comes walking in and had some friends with him. I said, ‘What’s your name?’ He said, ‘Daje,’ and I said I’ve been waiting to meet you, I’ve heard a lot about you. He didn’t like what I had to say about him. But look at him, he was in the worst position of all of them (the players who were in danger of being dismissed). He said, ‘Coach, you are not going to dismiss me from this program.’ I said that’s up to you. I’m not trying to dismiss you.”

On where Texas is at in terms of quarterback depth: “They’re going to be a year older next year. Swoopes is playing with a lot of confidence. Heard will grow up and be a better player next year. You still have Locksley and you still have Merrick, and we have one for this class (Shane Bueschele). It’s all about taking advantage of what we have and using it in the right way.”

On the key to winning Thursday: “You hope they don’t go out there and score too quickly on us. If you can run the ball and control the clock and keep their offense off the field, then that’s our advantage.”