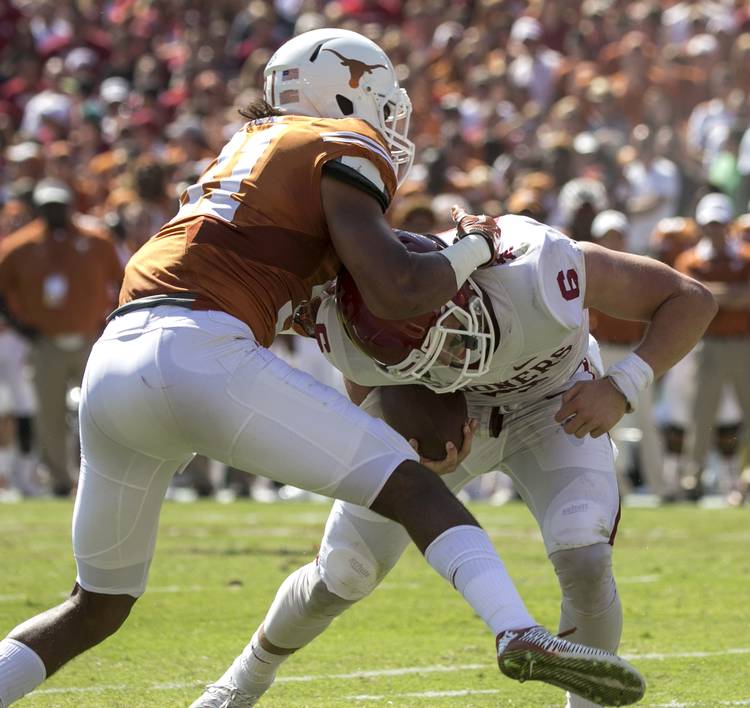 OCTOBER 10, 2015 - Oklahoma quarterback Baker Mayfield is brought down in the first half of action in the AT&T Red River Showdown between Texas and Oklahoma held at the Cotton Bowl in Dallas, Tx., on Saturday, October 10, 2015. (RODOLFO GONZALEZ / AMERICAN-STATESMAN)

There was plenty of Texas rivalry talk on Monday. First, it was Texas A&M, when Charlie Strong took a shot at the Aggies’ locker room barbershop and said he’d love to renew the series with the Longhorns’ in-state rival. Then, the discussion moved on to Oklahoma.

Longhorns tight end Alex De La Torre said Texas’ failure to duplicate its performance in an upset win over the Sooners is “frustrating.”

OU (10-1, 7-1), which has been perfect aside from that 24-17 loss on Oct. 10, can win the Big 12 title at Oklahoma State on Saturday, and is in the mix for a playoff berth. The Sooners were No. 7 last week and figure to get a bump when the updated rankings are announced on Tuesday.

“You look at it and say, we can beat them,” De La Torre said. “If we play at that level all of the time, we can go beat a lot of people. We can go play with a lot of people.”

McNeal may have been all a-Twitter on playing time, but Strong wasn’t