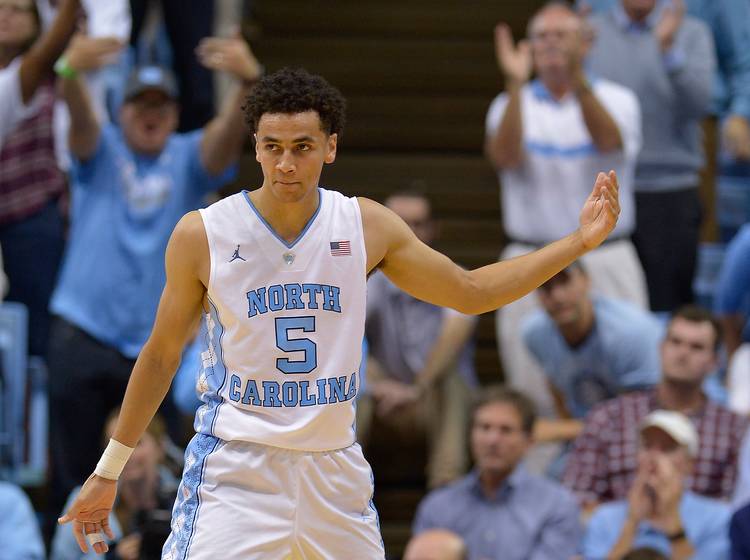 North Carolina's Marcus Paige encourages the crowd to stand and cheer during their game against the Maryland Terrapins at the Dean Smith Center on December 1, 2015 in Chapel Hill, North Carolina. North Carolina won 89-81. (Photo by Grant Halverson/Getty Images)

About Texas: Coach Shaka Smart’s three freshmen now have eight games under their belt, and all are finding a certain comfort level. Smart needs Kerwin Roach, Eric Davis and Tevin Mack all to contribute against North Carolina. Mack was practically giddy and relieved after getting 17 points against UT-San Antonio. Roach has shown incredible leaping ability, and Davis is now up to 40 percent from 3-point range. … C Prince Ibeh (lower back) could return after sitting out Tuesday’s game. Trainers examined him again Friday. … This is a prime opportunity for G Isaiah Taylor, matching wits with Marcus Paige. Taylor had only 10 points in the last two games.

About North Carolina: Star G Marcus Paige, the preseason co-ACC Player of the Year, missed the first six games with a broken bone in his right hand. Now that he’s back, several national pundits believe the Tar Heels are once again national-title contenders. In Paige’s absence, coach Roy Williams used Joel Berry II as the point guard. … Coach Roy Williams had plenty of success against Texas during his Kansas coaching days, but he’s 1-5 against UT at North Carolina. The Heels are 0-2 in Austin. … UNC’s only stumble so far came against Northern Iowa on a night the Heels were 5 for 18 from 3-point range.

Longhorns in the NBA: Through Dec. 9

Sterlin Gilbert on his offense: ‘The sky’s the limit’