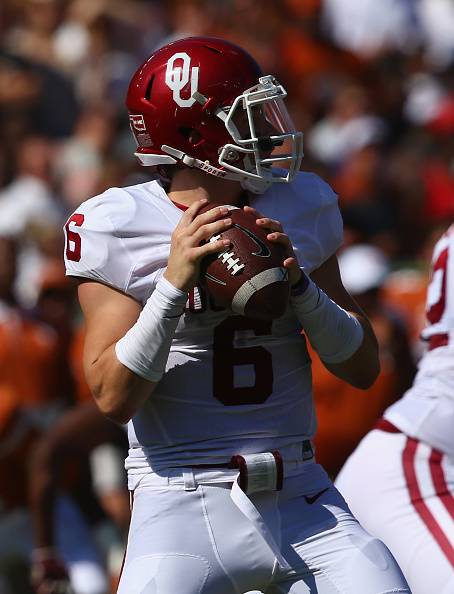 Baker Mayfield, the Oklahoma quarterback who starred for Lake Travis High School, has become one of the most important players in college football this season.

He finished fourth in Heisman Trophy balloting and he’s been second-team All-American on most lists to Clemson’s Deshaun Watson.

How’d he ever get away from the local school and not sign with the Texas Longhorns?

Former coach Mack Brown recently conceded that it was a mistake not to offer Mayfield. He told The Oklahoman:

“I’ve been criticized enough about quarterbacks. But this is one that not only I missed, but everybody missed.”

“Boy, all of us made a huge mistake,” Brown said. “He’s just a super player and probably as much for his spirit, his team leadership, his toughness. Just what he brings off the field really enhances his ability to run and make plays on the field.”

Most everybody did miss Mayfield, even Oklahoma, when he was coming out of Lake Travis. Mayfield, after receiving only three offers from FBS schools, walked on at Texas Tech. After starting for Kliff Kingsbury’s Red Raiders during his true freshman year in 2013, Mayfield transferred to the Sooners. He sat out last season because of NCAA transfer rules.

Brown and the Longhorns might have shied away from Mayfield after the struggles of Lake Travis alum Garrett Gilbert, who signed with UT in 2009.

“We all knew Baker was a really good player,” Brown told the Oklahoman. “But with Michael Brewer, Garrett Gilbert and Baker all coming from Lake Travis, some people probably thought it was a system.”

Mayfield grew up a fan of the Sooners. He’s started two games against Texas. He had bad games both times.

In 2013, he was the quarterback when the Longhorns beat Texas Tech, 41-16. Mayfield was sacked seven times.

Texas knocked off the Sooners, 24-17, earlier this year in one of the biggest upsets of the season. Mayfield was sacked six times.