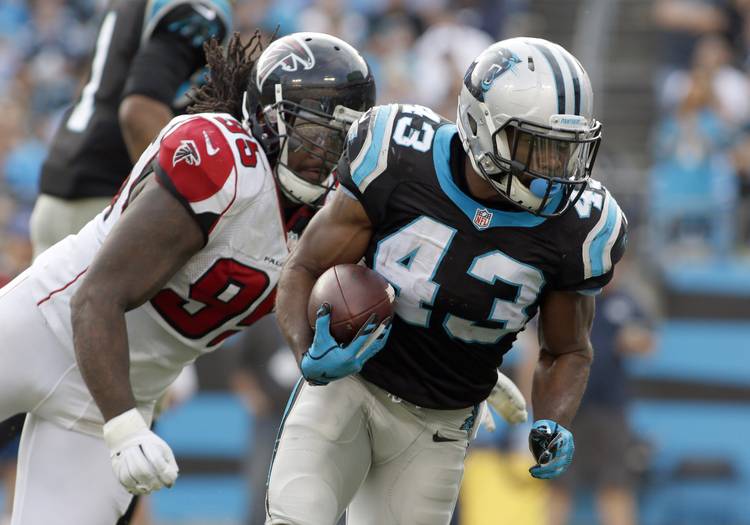 Fozzy Whittaker scored and had his best game of the year to help the Panthers remain undefeated. (AP Photo/Bob Leverone)

Is there such a thing as a former Longhorn? These players will always be Longhorns to University of Texas fans, even though they’ve graduated to the next level of football. Every Tuesday, we’ll update you on how they performed the previous weekend. Here’s a look at the Longhorns in the NFL and how they fared in Week 14.

Fozzy Whittaker, Panthers running back—Whittaker actually had nine offensive touches, which is a season-high for him. He had 34 yards rushing and even scored. With the Panthers rolling, he might find himself a nice expanding role.

Derrick Johnson, Chiefs linebacker—He was second on the team with six total tackles and had an interception he returned for five yards just after the Chargers had entered the Kansas City side of the field. His play helped the Chiefs win a tight game 10-3.

Earl Thomas, Seahawks safety—Thomas had four tackles in the Seahawks’ dominating 35-6 win over the Ravens on Sunday. He’s got 59 tackles for the year and four interceptions.

Michael Griffin, Titans safety—Griffin had seven tackles and a tackle for loss in the 30-8 setback against the Jets. He’s logged 80 tackles for the season.

Malcom Brown, Patriots defensive tackle—He had two tackles and recovered a fumble in the Patriots’ 27-6 win over the Texans on Sunday night. The Patriots allowed just 87 rushing yards.

Kenny Vaccaro, Saints safety—He tied his season-low in tackles with two and added a pass deflection in the Saints’ win over the Buccaneers. He has 88 tackles on the year, but the Saints tend to lose when their safety is making more than five tackles in a game.

Lamarr Houston, Bears linebacker—Houston had his best game of the season as he led the Bears with nine tackles in Sunday’s 24-21 loss to Washington. He also sacked Kirk Cousins and had two tackles for losses.

Henry Melton, Buccaneers defensive tackle—Melton had five tackles, a sack and hit the quarterback twice in a 24-17 loss to the Saints. It was his season-high in tackles and his second sack of the year.

Brian Orakpo, Titans linebacker—He registered two tackles and failed to earn a sack for the third week in a row after having seven in the first ten games.

Justin Tucker, Ravens kicker—He scored the only points for the Ravens on Sunday, as he went 2 for 2 with a long field goal of 30 yards.

Phil Dawson, 49ers kicker—Dawson cashed in on his only opportunity for a field goal, connecting on a 44-yarder.

Quandre Diggs, Lions cornerback—Diggs is finding ways to contribute as he had three tackles, a tackle for loss and a pass defended against the Rams. He has 28 tackles so far and five passes defended.

Brian Robison, Vikings defensive end—He made three tackles in the Vikings loss to the Cardinals. He has 31 tackles and three sacks for the year.

Alex Okafor, Cardinals linebacker—Okafor recovered a fumble to go along with three tackles on Thursday night. He has 22 tackles on the season.

Sam Acho, Bears linebacker—He made three tackles against the Redskins to bring his total to 28 on the year.

Roy Miller, Jaguars defensive tackle—He hit the quarterback once, but failed to register any other stat in the Jaguars’ dominating 51-16 win over the Colts.

Tony Hills, Saints offensive tackle—He didn’t start, but he played for the third week in a row, helping protect Drew Brees to the tune of 312 yards passing and two touchdowns.

Keenan Robinson, Redskins linebacker—Though active the last three games, he didn’t get any game action until Sunday’s win over the Bears. He failed to register a stat, however.

Cory Redding, Cardinals defensive end—He was able to play, coming off an ankle injury, but he failed to register a stat in the win over the Vikings.

Aaron Williams, Bills safety—He was eligible to return from the short-term IR in Week 14, but the Bills don’t want to rush him back off the neck injury.