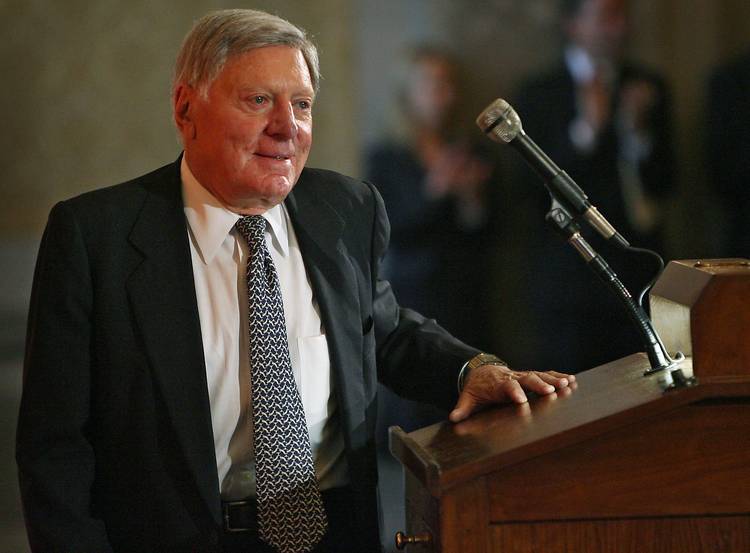 Joe Jamail, a towering figure in Texas courtrooms known for his swearing, swash-buckling style, died early Wednesday from complications with pneumonia, according to multiple University of Texas officials. The outspoken lawyer, who loved a good argument as much as his Texas Longhorns, was 90.

In addition to being one of the greatest trial lawyers in American history, Jamail was a major benefactor to the University of Texas, both on the academic side as well as athletics. The Lee and Joe Jamail Texas Swim Center is named in his honor. The Longhorns’ football team plays on what’s known as Joe Jamail Field inside Royal-Memorial Stadium.

In one of his last interviews with the American-Statesman, Jamail acknowledged the passionate Texas fan base.

“You’re asking me why Texas fans are upset?” Jamail said in a story about then-athletic director Steve Patterson. “I represented Darrell Royal, and fans have been upset long before that.

“They’re born with the red ass.”

On Wednesday morning, Patterson told the Statesman, “We’ve been friends for 35 years. Just love the guy. It’s a loss for the city, the state, the university and everybody that was great friends with him. You go his office and see the cases he won and all the names. He’s just a giant. Great American success story.”

READ KIRK BOHLS’ COLUMN ON THE PASSING OF JOE JAMAIL

Texas athletic director Mike Perrin released a statement in which he called Jamail “a giant of a man, who made a huge impact in all facets of life.”

“His contributions to the University of Texas are a lasting legacy and testament to his never ending quest to give back and support activities, the law and sports he believed in,” Perrin said. “Our heartfelt condolences go out to Joe’s family. With them, we share grief and a sense of loss in his passing. But, we also share our joy of having had him as a major part of so many lives.

“I don’t think the University of Texas has ever had a better friend than Joe Jamail. When something needed to get done on campus, you could count on him to help. Joe wasn’t a guy wanting to give advice or get his way — he just wanted to know what he could do to be part of the solution. Joe was a dear friend of mine and our coaches. He was very close to Darrell and Edith Royal and Mack and Sally Brown. He shared in our national championships and we are proud his name is on our field — it’s very deserving.”

“Joe Jamail was one of the first people I had a chance to talk to when I came to Texas, and I enjoyed our numerous conversations after that. I was in awe of his story and how hard he worked for everything. I also found out right away that he loved Texas and always wanted what was best for this program. He was a loyal Longhorn supporter and became a good friend.

“I loved it because he was brash, confident and never ran from anything. He wore his feelings on his sleeve, but he also was a guy that cared about everyone and would help anyone in need.

“It’s a sad day knowing that such an important part of our program has passed. Our thoughts and prayers are with his family. When we go in the stadium and see the Joe Jamail Field sign and his statue it will continue to remind us how much he gave to this program. I know I’ll think about him and remember a story he told every time I see them.”

“Joe’s passing is just devastating news. First and foremost, my thoughts and prayers are with his family. I don’t know where to begin with Joe. Since we came to Texas 18 years ago, he’s been a friend, mentor, confidant, advisor – he’s been everything to me. He and Coach Royal were two of the most influential people in my life and having lost them both now is so difficult.

“Joe was one in a million. He was frank, direct and at times crass, but most importantly, caring and giving. I’ll miss the conversations, advice and simple solutions he always had to what seemed to be the most complex issues. I always knew I could call Joe at any time with any question and he’d be there for me. I will really miss him, but count myself as one of the lucky ones whose life has been changed by Joe Jamail. He has affected so much and so many with all he did. He was just a great, great man who Sally and I, the entire University of Texas community, State of Texas and friends of his worldwide will dearly miss.”

“The Jamail family has been like a second family to me. They’ve supported me through all of my highs and the lows and have been tremendously supportive. Joe was always there to guide me any time I needed him, and even when I didn’t know I did. He was an unbelievably loving and giving man. It didn’t matter the time of day, place or situation, he was always there for me, and I know he did the same for so many others. It’s just shocking to know he’s no longer there. I’m really missing him right now, but can’t even begin to imagine how much more I’ll miss him in the days and months to come. He was a really, really special man who made an immense impact on my life and will continue to through all of the advice, knowledge and wisdom he shared with me over the years. I will share any support I can with his family and have them in my thoughts during this difficult time. The Longhorns family lost a great supporter, friend and iconic figure today. Joe, we’ll miss you, but never forget you.”

“It’s very sad to hear a great friend and Texas legend Joe Jamail has left us. He will be missed but leaves us all with many great memories, stories and life lessons. I can’t thank him enough for all of the support.”

Was Joe Jamail the ‘greatest lawyer who ever lived’?