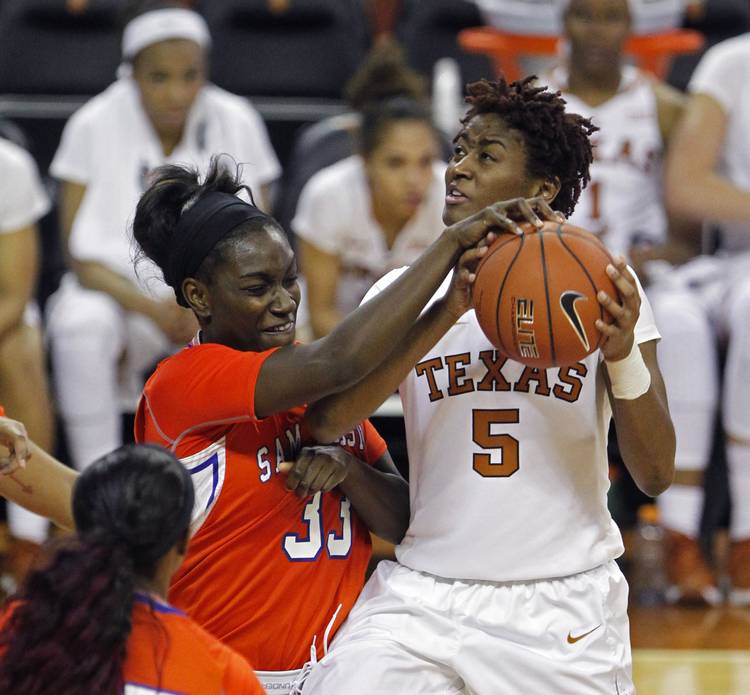 When the starters failed to produce Sunday, Texas coach Karen Aston leaned on several reserves.
One of them, Lashann Higgs, scored 17 points and the No. 5 Longhorns beat Sam Houston State 83-49.
Higgs, a highly touted freshman guard, produced a season-high eight assists, matched her best with four steals, and grabbed eight rebounds. The 17 points were one fewer than her best.
Another sub, Ariel Atkins, added 12 points as the Longhorns (11-0) increased their regular season non-conference winning streak to 25 games, dating back to the 2013-14 season.
Reserves Kelsey Lang and Jordan Hosey scored 10 apiece.
The bench accounted for 62 points, and Aston saw other value as well.
“Right now, the players that come off of our bench, those guys really give us really good defensive energy,” Aston said. “You really have to have that in (Big 12) play.”
Higgs, blessed with exceptional quickness, is still becoming acclimated to college basketball.
“What I had to learn is slowing down and looking at each option instead of going, going, going,” Higgs said.
Atkins, a starter last season, played 19 minutes as a reserve in her second game since returning from off-season surgery to her right ankle. She played only six minutes in her first game back, against Arkansas on Dec. 20.
“Physically I feel fine,” Atkins said. “Conditioning wise, I’m still working on that.”
Shernise Robertson led Sam Houston (4-6) with 16 points but converted only 4 of 14 shots from the field.
Longhorns missed 10 of first 11 shots but warmed up quickly enough to fashion a 13-0 push in the first quarter and a 36-17 halftime lead.
Higgs had nine points, four assists and four rebounds in the half. Lang scored eight points. Both were rewarded by Aston with elevation to the starting lineup for the second half. Aston said that reserves could become starters this season.
Sam Houston coach Brenda Welch-Nichols deployed 13 players with hopes that they could prove themselves ready for Southland Conference competition, which begins on Saturday.
“I got everybody in and told them, you got an opportunity,” Welch-Nichols said. “Now show me what you got.”
TIP-INS
Sam Houston: The Bearkats average nearly 20 turnovers a game, which ranks 306th in the country. They committed a season-high 29 against Texas. Sam Houston is even worse in turnover margin, 331st with minus-5.89. The margin was minus-nine against Texas.
Texas: Guard Brooke McCarty, the Longhorns’ leading scorer this season, went to the bench with two fouls less than four minutes of the game. She did not return until the third quarter. . The Longhorns have outrebounded their opponents in 10 of 11 games this season, including Sam Houston by 43-24. Only Tennessee outboarded Texas.
CLEAN SWEEP
The Longhorns completed their last two non-conference schedules with similar results. In 2014-15, they were 11-0 with three victories against opponents ranked in the top 10. This season, they finished 11-0 with wins against two teams in the top 10 and one in the top 15. Aston said she is pleased with the record, and usually the effort, though not always the execution.
“I think our team has to start playing better,” Aston said. “The last few games I don’t feel like we’ve been playing at the level we need to play at. I don’t think our effort was the problem today.”
NO TREYS FOR TEXAS
The Longhorns missed all 10 of their 3-point shots, failing to make one for the first time since March 6, 2007 against Missouri. Their two best shooters this season, starters Brooke McCarty and Celina Rodrigo, were in early foul trouble and combined to play only 27 minutes, each missing with her only 3-point attempt. Coach Karen Aston was surprised to learn Texas had gone nine years without a trey, figuring it would have been more recent.
“We haven’t, in the past three or four years, been known for our shooting,” Aston said. “I think this is a pretty good shooting team. I’m actually OK with (0-10). We only shot 10.”
UP NEXT
Sam Houston State is at Incarnate Word on Saturday.
Texas hosts at West Virginia on Wednesday.

YOUR VOTE: Longhorns Story of the Year