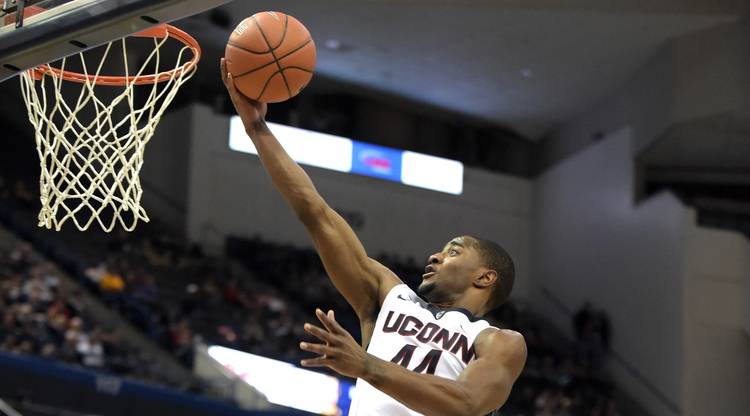 Connecticut's Rodney Purvis (44) lays in two points late in the second half against UMass-Lowell at the XL Center in Hartford, Conn., on Sunday, Dec. 20, 2015. UConn won, 88-79. (Patrick Raycraft/Hartford Courant/TNS)

About the Longhorns: Coach Shaka Smart’s team enjoyed a nine-day holiday break since its last game, a two-point road win over Stanford. But there was a significant setback during practice on Sunday when center Cameron Ridley suffered a broken left foot. He’ll have surgery on Tuesday. Prince Ibeh likely fills his spot in the starting lineup. … Texas ranks last in the Big 12 in free-throw shooting percentage (.611). … This is the last tuneup before Big 12 play begins at Texas Tech on Saturday. … Isaiah Taylor (14.7) is the only Texas player among the top 15 scorers in the league. He’s scored at least 20 points three this so far this season.

About the Huskies: Coach Kevin Ollie’s team also is battling injuries. Center Amida Brimah recently had surgery to repair a broken finger. He’s expected to miss at least six weeks. Brimah ranked ninth nationally with 3.0 blocks per game. Reserve guard Sam Cassell Jr. is fighting through a sprained ankle. … Still, the Huskies are one of the best shooting teams in Division I. UConn hit 58.1 percent of its shots in a 92-52 win over Central Connecticut before Christmas. Ollie praised Shonn Miller after scoring 25 points in the win. “The ball in his hands, he’s magical,” said Ollie, who is a personal friend to Texas coach Shaka Smart.