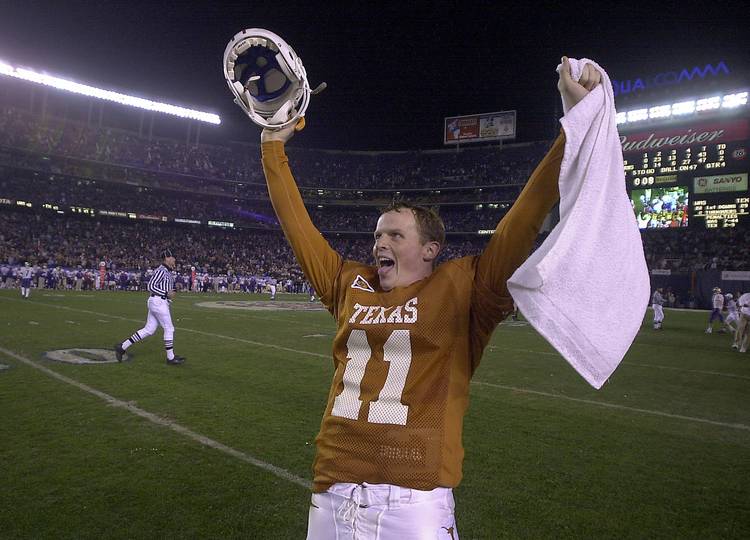 On Dec. 28, 2001, The Longhorns (10-2) faced Washington (8-3) in the Holiday Bowl. After a devastating upset defeat versus Colorado in the 2001 Big 12 Championship game that would have put the Horns in the national title game, Texas was slotted to play in the annual San Diego classic. After his performance in relief against Colorado, quarterback Major Applewhite earned the starting nod over Chris Simms.

After a scoreless first quarter, the teams scored 90 points combined, and Texas’ 27 points in the final quarter pushed the Longhorns to a 47-43 win. Down by 19 with a little over 18 minutes remaining in the contest, Applewhite engineered 23 unanswered points before leading the offense on an 80-yard scoring drive in the final two minutes of the game. Ivan WIlliams’ 3-yard rushing touchdown with 38 seconds remaining capped the comeback.

Applewhite was the game’s offensive MVP, throwing for 473 yards, completing 37 out of 53 passes for four touchdowns. B.J. Johnson (157) and Roy WIlliams (134) both topped the 100-yards receiving mark as the team logged 592 yards offense on the night.

Derrick Johnson led the defense with one sack, one tackle for loss, and interception and seven total tackles.

Some highlights of the Horns’ win (to view entire game, click here):

Applewhite’s 43-yard TD to B.J. Johnson in the 2nd quarter:

Applewhite’s 25-yard touchdown to Roy Williams in the 2nd quarter: