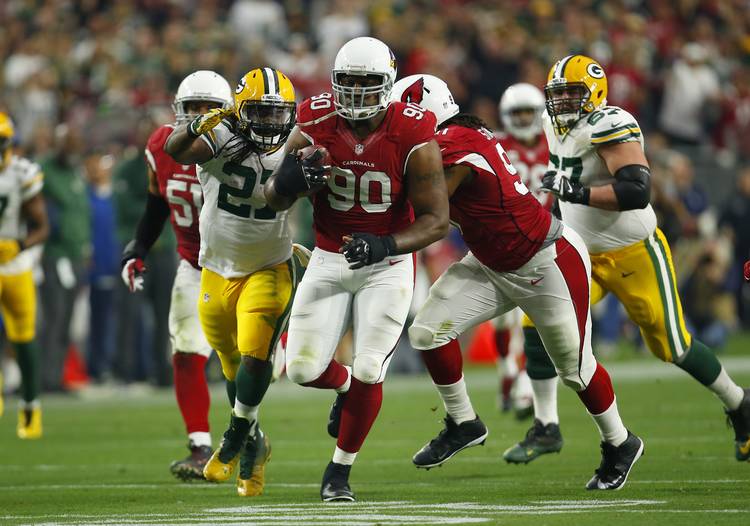 Cory Redding scored a touchdown as the Cardinals dominated the Packers. (Jeff Haynes/AP Images for Panini)

Is there such a thing as a former Longhorn? These players will always be Longhorns to University of Texas fans, even though they’ve graduated to the next level of football. Every Tuesday, we’ll update you on how they performed the previous weekend. Here’s a look at the Longhorns in the NFL and how they fared in Week 16.

Cory Redding, Cardinals defensive end—Redding recovered a fumble and rambled 36 yards for a touchdown, stiff-arming Eddie Lacy on the way to the end zone. Well, it wasn’t so much a stiff arm as it was more of a shrug-off. Take a look for yourself below. He also had a pass deflection.

Derrick Johnson, Chiefs linebacker—Johnson had six tackles in the Chiefs’ ninth straight win. He has 106 tackles on the year.

Brian Robison, Vikings defensive end—Robison had one tackle, a sack and hit the quarterback twice. He has five sacks for the year, four in the last four weeks.

Brian Orakpo, Titans linebacker—He made four tackles and had a pass deflection in the Titans loss to the Texans. He’s been held without a sack for five straight games after having a streak of a sack in four

Quandre Diggs, Lions cornerback—Diggs made three tackles in the Lions 32-17 win over the 49ers on Sunday. He has 36 total tackles and six pass deflections on the year. The rookie has played in all 15 games so far.

Earl Thomas, Seahawks safety—He had two tackles in the loss to the Rams, but he was on the wrong end of one of the highlights of the game when Todd Gurley hurdled the defensive back on the way to the end zone. Gurley fumbled on the play, but the Rams recovered the fumble and later scored on the drive.

It’s not all bad, Thomas can still feel good about being the Longhorn with the most consecutive Pro Bowl selections.

Michael Griffin, Titans safety—Griffin had a season high in tackles against the Texans, with 11, and leads the Titans with 97 on the year.

Malcom Brown, Patriots defensive tackle—He recorded his second-highest total tackles, with five, in the overtime loss to the Jets. He has 42 tackles on the year and three sacks.

Lyle Sendlein, Cardinals center—He helped the Cardinals rush for 121 yards as a team, while protecting Carson Palmer well enough to allow him to throw for 269 yards and a touchdown.

Kenny Vaccaro, Saints safety—Vaccaro made three tackles and sacked the quarterback twice in the Saints 38-27 win over the Jaguars. He has 98 tackles on the season and looks to eclipse the 100-tackle mark for the first time in his career.

Justin Tucker, Ravens kicker—Tucker was perfect on the day as he made both field goals he attempted, including a long of 50 yards, and both extra points.

Phil Dawson, 49ers kicker—Dawson made a 40-yard field goal, but also missed one from 45 yards. He connected on both his extra point attempts.

Keenan Robinson, Redskins linebacker—He had a pass deflection in the division-clinching win over the Eagles on Saturday night.

Roy Miller, Jaguars defensive tackle—Miller had three tackles in the loss to the Saints. He has 34 tackles on the year and has a career-high three sacks so far.

Alex Okafor, Cardinals linebacker—He had three tackles and hit the quarterback (who didn’t?) once.

Lamarr Houston, Bears linebacker—Houston had three tackles and a tackle for loss in the Bears’ 26-21 win over the Buccaneers.

Henry Melton, Buccaneers defensive tackle—He made four tackles and hit the quarterback once in Sunday’s loss to the Bears. He has 28 tackles and two sacks this year.

Fozzy Whittaker, Panthers running back—He rushed for 32 yards on five carries in the Panthers’ first loss of the season. That put him over 100 yards rushing this year. He also caught two passes for six yards before he was injured with a high ankle sprain.

Tony Hills, Saints offensive tackle—He’s yet to start this season, but he’s played in seven games for the Saints.

Sam Acho, Bears linebacker—He made two tackles and has 38 total on the year.

Geoff Swaim, Cowboys tight end—He’s on the active roster and got in the game on Sunday but failed to register a stat.