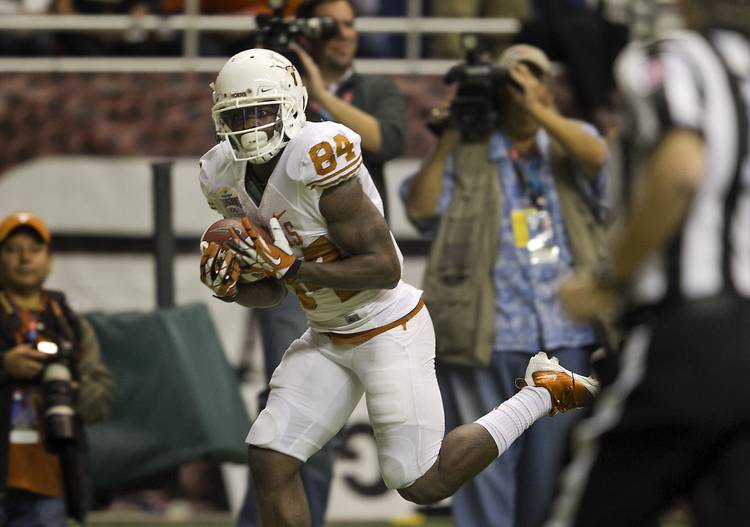 In what would be Mack Brown’s last bowl victory at Texas, the Longhorns faced Oregon State in the annual San Antonio matchup on Dec. 29, 2012. The unranked Longhorns bested the 15th-ranked Beavers 31-27 by scoring 14 unanswered fourth-quarter points on two David Ash touchdown tosses to Johnathan Gray and Marquise Goodwin. The bowl victory hoped to launch the Horns back to prominence. It didn’t.

FULL GALLERY OF PHOTOS FROM THE GAME

The final game of Goodwin’s Texas career became a showcase for his speed. He also scored on a 64-yard jet sweep in the second quarter, finishing the game with 132 yards of offense and earning the offensive MVP honors. Jaxon Shipley paced the Longhorns receivers with 88 yards on eight catches.

Defensive end Alex Okafor was the star of the game, registering 4 1/2 sacks, six tackles for loss and a forced fumble. The team compiled a total of 10 sacks on the night while holding the Oregon State offense to minus-4 yards in the final quarter.

Goodwin’s 64-yard sweep for a touchdown

Goodwin’s 36-yard catch for a touchdown

Ash’s 11-yard run for a touchdown in the third quarter: