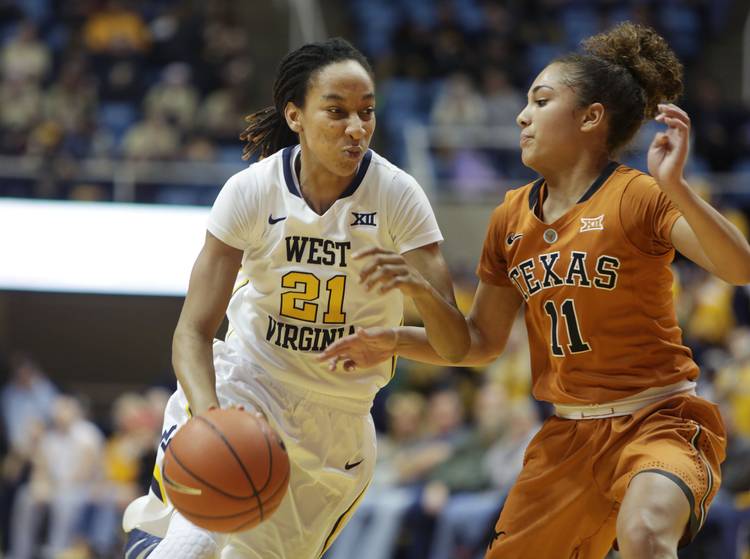 MORGANTOWN, W.Va.  — Ariel Atkins is still working her way back from an ankle injury that sidelined her for the first nine games of the season.
She had her best outing so far to help Texas win its Big 12 opener.
Atkins scored a season-best 18 points to lead No. 5 Texas to a 65-54 win over West Virginia on Wednesday night. It was just her third game of the season. The sophomore made six of her eight shots for the Longhorns (14-0). Imani Boyette added 15 points and 14 rebounds.
“I think we really just stuck together,” Atkins said. “That’s something we’ve been really big on this year is not folding under pressure.”
Texas coach Karen Aston was happy for the team’s first victory in Morgantown.
“I’m really proud of our team. We’ve never won here since we’ve been in the Big 12, so I think this is really a big win,” she said.
Freshman Tynice Martin led the Mountaineers (11-3) with 15 points to match her career high. Bria Holmes added 12 and Jessica Morton 10.
The Longhorns led 32-24 at the half and West Virginia couldn’t get much closer in the second 20 minutes.
After falling behind 10-0 at the outset, the Mountaineers made up a quick eight points to trail by 2. Texas pushed out again to lead 18-9 on a shot by Kelsey Lang.
The Longhorns led 32-24 at the half.
The Mountaineers got within 63-54 late, but could get no closer.
“I thought our girls battled,” said West Virginia coach Mike Carey, “especially our young players. I was well pleased with our young players.”
It was a strong defensive game for both teams. To this point, Texas’ lowest scoring output had come against Mississippi State, a game the Longhorns won at home. West Virginia’s was 62 in a loss to Gonzaga.

VERGE OF 1,000
Texas has 993 victories as a school. Just four teams in the history of the sport have achieved 1,000 wins. Tennessee, Louisiana Tech, James Madison, and Old Dominion.

WIN STREAK
West Virginia had produced nine consecutive wins, the most since 12 straight in 2013-14.

UP NEXT
Texas hosts Texas Tech in its Big 12 home opener on Saturday.
West Virginia visits Kansas on Sunday.