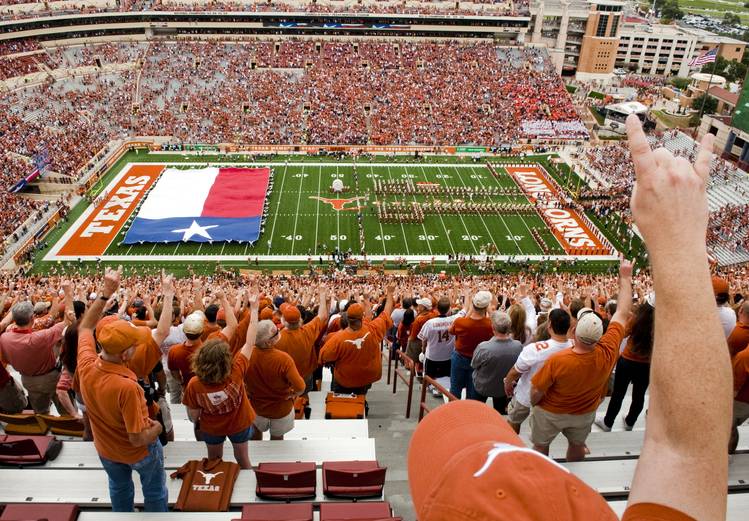 The world is on the cusp of a new year, and with a new year comes a fresh 12 months of Longhorn athletics.

Here are several important dates to mark on those Longhorn calendars mom and dad got you for Christmas.

Jan. 17: It’s the basketball game that should take center stage nationwide and definitely Texas. The Longhorns’ women’s basketball team (ranked No. 5 on New Year’s Eve) takes on  the conference’s biggest power, No. 4-ranked Baylor, in Austin at 2:30 p.m.

Jan. 23: Men’s basketball coach Shaka Smart talked the talk when he was introduced as the new Longhorns coach last spring when it came to challenging Kansas, the league’s most accomplished program. Smart, then the coach at VCU, once beat Kansas in the NCAA Tournament to advance to the Final Four. Texas plays Kansas at 1 p.m. in Lawrence.

Feb. 3: National signing day is Christmas for college football coaches, and last year the Longhorns had a great day. What will it look like this year?

Feb. 6: Baseball is back! Texas hosts the alumni game on this date, then begins the regular season 13 days later at home against UNLV.

Feb. 29: Remember what we said about Shaka Smart and reigning 11-time Big 12 regular season champion Kansas? Well, Texas’ last home game of the 2015-16 season— senior night— is against the Jayhawks at 8 p.m.

Feb. 29: Texas women’s basketball finishes the regular season with Baylor on the road at 8 p.m.

March 30: The Texas Relays take over the University of Texas. The massive track and field tournament finishes on April 2.

April TBA: The Texas Longhorns will likely host their annual spring football game in late April like they did in 2015.

April 28: The Big 12 women’s tennis tournament begins in Stillwater, Okla., and lasts until May 1.

April 29: The Big 12 tennis quarterfinals begin in Stillwater, Okla.. The tournament runs till May 4.

May 5: The NCAA women’s golf Regional Championships begin at a time and date TBD.

May 13: The Big 12 Conference Outdoor Championships begin for track and field in Fort Worth.

May 14: Rowing! Yes, the Big 12 holds a championship tournament, and the Longhorns will head to Oak Ridge, Tenn., at Melton Hill Lake from May 14-15.

May 20: The NCAA Women’s Golf Championships begin in Eugene, Ore., at the Eugene Country Club.

May 25: The Big 12 baseball championships begin at Chickasaw Bricktown Ballpark in Oklahoma City. The tournament ends May 29.

May 26: NCAA West Preliminary Rounds for track and field begin in Lawrence, Kan.

May 27: The NCAA Rowing Championships begin in Gold River, Calif., at Lake Natoma and go from May 27-29.

July 1: Track and field Olympic trials begin in, where else, Eugene, Ore., and a handful of Texas athletes are expected to compete.

August TBA: The volleyball and soccer seasons will begin in August; check back for complete schedule.

Sept. 3: The football season starts with Texas hosting the Irish of Notre Dame. Hopefully it goes better than it did in South Bend in 2015.

Oct. 1: Texas begins the Big 12 football season in Stillwater, Okla., against the Cowboys.

Oct. 8: Remember when Texas stunned Oklahoma at the Cotton Bowl in 2015? Of course you do. Well, the Sooners will try to get revenge.

Oct. 15: We used to not have to circle the date of the Texas-Iowa State game. Not anymore, apparently.

Oct. 29: Baylor and Texas football play in Austin as the Bears will try to avenge the surprising loss they suffered to Texas at home.

Nov. 24: You should be thankful for Texas football on this day, and you’ll be thankful that even though it’s not the team you really want to see them play on Thanksgiving, it is against Texas Christian University, which handed Texas one of the worst losses in program history in 2015.

Dec. TBA: Bowl game? Basketball schedules? NCAA volleyball final four and tournament games? These will and could possibly all happen in December.

Longhorns in the NBA: Through Dec. 30