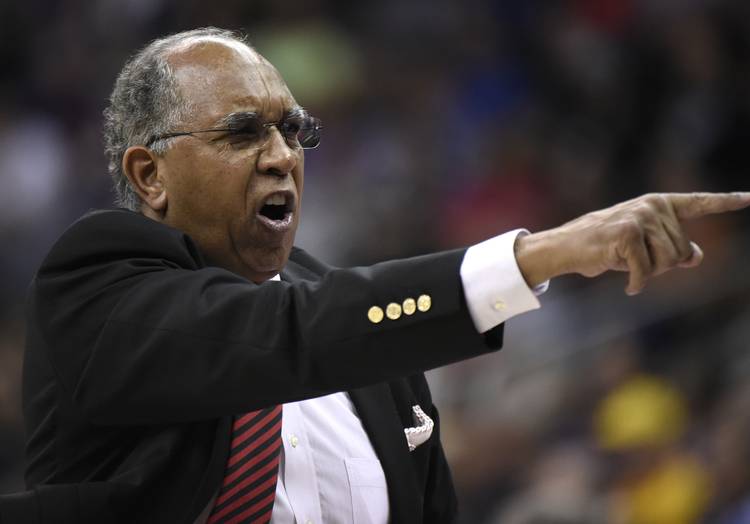 Texas Tech coach Tubby Smith directs his team against the Texas Longhorns during the first round of the Big 12 basketball tournament at Sprint Center on March 11, 2015 in Kansas City, Missouri. (Photo by Ed Zurga/Getty Images)

About the Longhorns: Most Big 12 games are tight affairs, which gives good free throw shooters a real advantage. Texas goes into league play with the worst free-throw shooting percentage (.617) in the Big 12. … Whether he starts or comes off the bench, C Prince Ibeh must play under control and not get into foul trouble. Playing behind the now-injured Cam Ridley, Ibeh averaged only 10.3 minutes per game. Shaq Cleare played only 9.3 minutes per game. Those totals will grow exponentially over the next two months. … F Connor Lammert was 0 for 4 from 3-point range against Connecticut. Lammert needs a few shots to fall to boost his confidence going into this critical stretch.

About the Red Raiders: Coach Tubby Smith’s club won all six games in December by double figures. The most recent win came Tuesday against Richmond, a 15-point win that pushed the Red Raiders’ winning streak to nine games. Devaugntah Williams had a game-high 17 points and a career-high eight rebounds. … Tech’s scoring and defensive totals hover in the middle of the Big 12 totals. But one thing this team does well is play defense. Opponents are shooting 38.5 percent, the second-lowest total in the league. … With Cam Ridley out, Tech’s Zach Smith needs to gobble up rebounds. So far, the Raiders have a plus-4.7 rebounding margin.

Longhorns in the NBA: Through Dec. 30