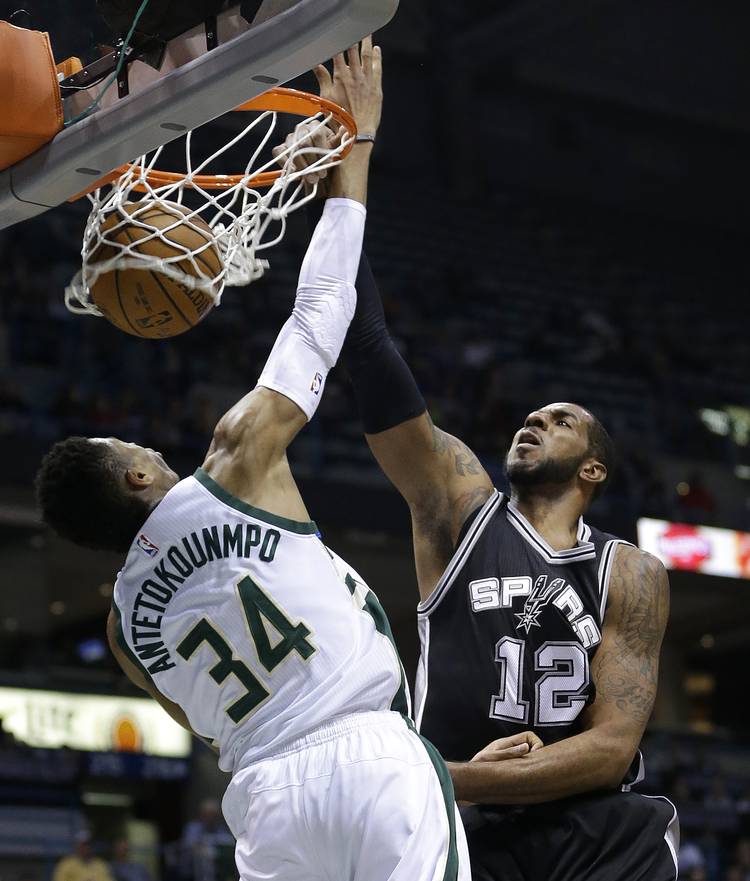 LaMarcus Aldridge had a double-double, 16 points and 11 rebounds, against the Bucks on Monday. (AP Photo/Aaron Gash)

LaMarcus Aldridge, F, San Antonio Spurs: Aldridge had 24 points and nine rebounds in the Spurs’ blowout win over the Rockets on Saturday. He followed that up with a 16 point, 11 rebound performance against the Bucks. He’s really starting to act like a Spur, even missing Wednesday’s win over the Jazz for “rest.” He’s averaging 15.8 points, 8.9 rebounds and one block per game.

Kevin Durant, F, Oklahoma City Thunder: The Thunder’s only loss in its last six games can be attributed to Durant missing the game with a sprained right big toe. The Thunder fell to the Kings 116-104 with Durant missing the game and Russell Westbrook struggling offensively. Oklahoma City won the previous game against the Hornets 109-90 with Durant scoring 29 points and hauling in 11 rebounds. When he returned from the hurt toe, he scored 26 points and grabbed 17 rebounds in a win over the Grizzlies on Wednesday.

Tristan Thompson, F, Cleveland Cavaliers: He’s had two double-doubles in his last three games. He scored ten points and grabbed 12 rebounds in Saturday’s win over the Magic and followed that up with 14 points and 11 boards in a win over the Raptors. He played his third-most minutes (36) in Wednesday’s win over the Wizards as he scored 12 points.

Myles Turner, F, Indiana Pacers: Turner nearly notched a double-double in his second game back from a broken thumb on New Year’s eve. He had eight points and nine rebounds. Since then his minutes have come down a tad. He played ten minutes against the Pistons on Saturday and scored four points to go with four rebounds. He played just seven minutes and went 0 for 2 against the Heat on Monday. He was perfect in his limited time against the Magic, scoring six points on 3 for 3 shooting. He also had five rebounds in the game. He’s averaging 5.8 points and 3.8 rebounds per game.

Avery Bradley, G, Boston Celtics: Bradley hasn’t played since Saturday when he left the Nets’ game with a bruised left hip. He’s looking to return by Sunday against the Grizzlies.

P.J. Tucker, F, Phoenix Suns: Tucker notched his tenth double-digit scoring game on Wednesday when he scored ten points and collected five rebounds in the win over the Hornets. The win halted a nine-game losing streak for the Suns. In Tucker’s two previous games he scored just five points in each, but before that he had a 22-point outburst against the Thunder on Thursday. He also had seven rebounds, three assists and three steals.

Cory Joseph, G, Toronto Raptors: He’s been alternating between decent and good games in his last four times out. On Friday he was held to six points, but added six assists in the win over the Hornets. He scored 13  in a losing effort to the Bulls, then went 0 for 5 against the Cavs. On Wednesday he scored ten points in the Raptors’ win over the Nets.

D.J. Augustin, G, Oklahoma City Thunder: The seventh-year point guard has given way to the rookie Cameron Payne. Augustin hasn’t seen any minutes in the last five games while Payne has provided a spark off the bench.