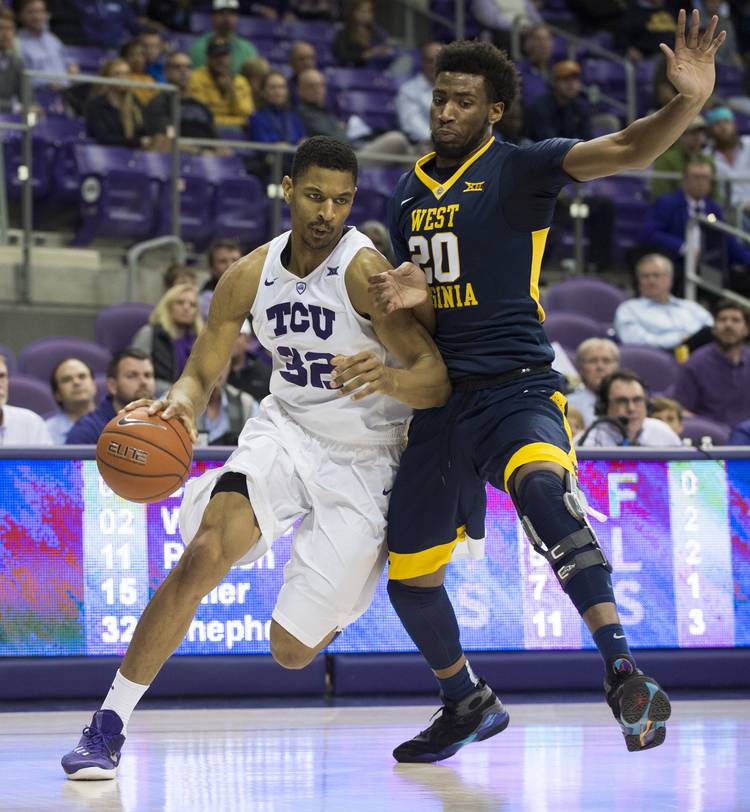 TCU's Karviar Shepherd drives to the basket against West Virgina's Brandon Watkins on January 4, 2016, at Schollmaier Arena in Fort Worth. (Photo by Cooper Neill/Getty Images)

Series history: Texas leads the all-times series, 106-62. The Longhorns are 7-0 against the Horned Frogs since Fort Worth-based school joined the Big 12. Texas has not lost to TCU since 1995.

About the Longhorns: G Isaiah Taylor needs only nine points to become the 36th player in school history to score at least 1,000 points. Taylor already has two more free throw attempts this season than he did as a sophomore. Those numbers were partly skewed due to Taylor missing 10 games with a broken wrist. Still, he’s had 103 free throw attempts this season compared to 101 last year. … C Prince Ibeh averaged 9.5 rebounds so far in two Big 12 games. … This is the worst free throw shooting team (.625) that Shaka Smart has ever coached in seven seasons.

About the Horned Frogs: This game marks the start of a difficult stretch for Trent Johnson’s team. Next week, TCU plays at Baylor and Kansas. … There’s no secret in how to stop the Frogs. In two conference games, Chauncey Collins and Malique Trent  have combined to score 57 of the team’s 135 points (42.2 percent). … Team captain Chris Washburn missed most of non-conference with a broken finger. In three games, he’s averaging 5.7 points in 21.7 minutes. … One underrated aspect of Karviar Shepherd’s interior play is that he usually doesn’t foul too much. Big 12 games are physical affairs, yet Shepherd averages just 2.8 fouls per game.