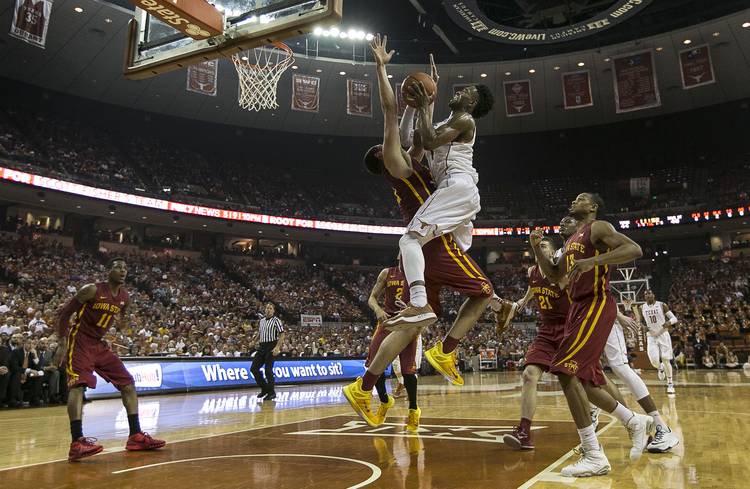 (USE THIS PHOTO) FEBRUARY 21, 2015 - Texas #1, Isaiah Taylor collides with Iowa State #31, Georges Niang, as he drives to the basket during the second half of NCCA basketball game on Saturday, Feb. 21, 2015 in Austin, Texas. Iowa State defeated Texas 85-77. (RODOLFO GONZALEZ / AMERICAN-STATESMAN)

It’s been a tough time for the Texas men’s basketball team since Cam Ridley’s injury, and the Longhorns currently have a 1-2 Big 12 record. The latest loss came at the hands of TCU, 58-57, on the road.

Now Texas returns to Austin for an 8 p.m. Tuesday tipoff against Iowa State, which – contrary to its national ranking – has the same Big 12 record as Texas. The reigning Big 12 Tournament champions are 12-3 and were ranked No. 13 last week. They lost 94-89 to Baylor over the weekend

Here are five memorable Big 12 Texas-Iowa State games from the past:

The first of two games from last season on this list.  Texas, having played Iowa State tough (see below) a few months earlier, led Iowa State 36-25 at halftime (a flipped halftime score from the January matchup). But this time it was Iowa State that played a blazing second half and beat the Longhorns 69-67 on this last-second shot:

In one of the wildest games of the Big 12 last season, Texas trailed 36-25 at halftime in Ames, Iowa, but the Longhorns scored a whooping 61 points in the second half (Texas entered the game averaging just 63.7 points per game).  Furthermore, Texas trailed by 21 points (69-48) with about eight minutes left in the game.

But Texas never completed the comeback and never came closer than three points in the loss.

At the time, Iowa State was ranked No. 7 in the nation, and Texas was in the middle of an 18-12 regular season under coach Tom Penders. Texas had just lost to Nebraska by 12 points the game before, but at the Erwin Center the Longhorns held the Cyclones 10 points below their season average in the win.

Texas received 10 points in two overtimes from Sheldon McClellan, and Myck Kabongo returned from a 23-game NCAA suspension as Texas pulled off a big win at home. This was a bright spot in a what was a losing season for Texas.

Texas was ranked No. 20 in the country at the time and was led by future NBA players LaMarcus Aldridge, P.J. Tucker and Daniel Gibson. Iowa State was unranked and led by Curtis Stinson, Tasheed Carr and Will Blalock. Carr had a career-high 22 points, 13 coming in overtime. Iowa State trailed by eight points late but forced overtime and wound up winning a double-overtime game by a rare double-digit margin.

It snapped a 28-game road conference losing streak for the Cyclones.