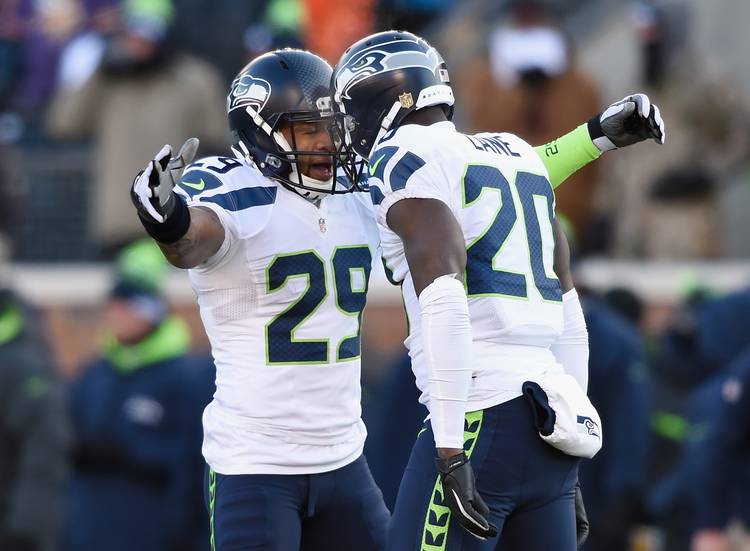 Earl Thomas and the Seahawks, with a little luck, gutted out a win in a freezing environment. (Photo by Hannah Foslien/Getty Images)

Is there such a thing as a former Longhorn? These players will always be Longhorns to University of Texas fans, even though they’ve graduated to the next level of football. Every Tuesday, we’ll update you on how they performed the previous weekend. Here’s a look at the Longhorns in the NFL and how they fared in the wild-card round of the playoffs.

Earl Thomas, Seahawks safety—Fresh off being named the best Longhorn in the NFL, Thomas and his Seahawks were bailed out by some rather stubborn football laces. The Minnesota Vikings were primed to upset the Seahawks, needing just to make a 27-yard (shorter than an extra point) field goal for the win. Blair Walsh kicked the ball with the laces in and turned it way left and no good. To be fair, it may not have been entirely the laces’ fault. On Walsh’s previous attempt, Richard Sherman was this close to blocking the kick as he rushed from Walsh’s right side. With the miss, the Seahawks survived and Thomas gets to play another week. He had four tackles and a pass deflection in the win. He’ll travel to Carolina for a much tougher test against the Panthers, but you can never count Seattle out.

Brian Robison, Vikings defensive end—Robison had two tackles, a tackle for loss and a quarterback hit in Sunday’s heartbreaking loss to the Seahawks. Robison had some adjusting to do this year, but improved in his second year under head coach Mike Zimmer. He finished the year with 34 tackles and five sacks. It’s possible, at 32, that he may end up a cap casualty, but he’s expressed his desire to return to the Vikings next season.

Derrick Johnson, Chiefs linebacker—He was tied for the team lead in tackles with six as the Chiefs utterly dominated the Texans to advance to the AFC divisional round. Altogether the Chiefs forced five turnovers, including four interceptions.

Colt McCoy, Redskins quarterback—After playing in the regular season finale to ensure Kirk Cousins didn’t get hurt, McCoy was relegated to the backup spot as the Redskins lost to the Packers at home. McCoy finished the year 7 for 11 for 128 yards and a touchdown. He’s a free agent entering next season.

Keenan Robinson, Redskins linebacker—He didn’t register a stat against the Packers and missed some time this season after starting strong. He started at middle linebacker for the first eight games before getting hurt with a shoulder injury. He missed four games and was replaced as the starter when he returned to the field. Before his injury he had 30 tackles, a tackle for loss and an interception he returned for 44 yards. Following his return, he had just six total tackles in four games.

Malcom Brown, Patriots defensive tackle—The rookie is set to start his first playoff game as the Patriots host the Chiefs on Saturday afternoon. He started 12 games this season, replacing Vince Wilfork in the middle of the defensive line. He totaled 48 tackles and three sacks. He’ll try to get a hold of Charcandrick West and Spencer Ware as they hit the line of scrimmage.

Jamaal Charles, Chiefs running back—Charles had to watch from the sideline as his teammates dismantled the Houston Texans on Saturday. Since tearing his ACL, Charles has been treated to an 11-game winning streak by his team. In a blog post on his website Charles praised his team for all they’ve accomplished without him. “Nobody wants to start 1-5, but it’s impressive to get from there to where they are today. That tells you a lot about our team,” he wrote. From 1-5 to a divisional round matchup against the defending Super Bowl champions is indeed impressive.

Cory Redding, Cardinals defensive end—Redding played in 12 games this season but only logged a stat in five of them. He did have a penchant for making big plays, however, including an interception he returned for 30 yards against the Lions and a fumble return for a touchdown versus the Packers. Yes, the same Packers team he and the Cardinals will face on Saturday night.

Alex Okafor, Cardinals linebacker—The outside linebacker had 31 total tackles this year and two sacks. He’ll try to hold down a Packers offense that dominated the Redskins defense.

Fozzy Whittaker, Panthers running back—He suffered a high ankle sprain in Week 16, but the hope was that he’d be able to return in time for the divisional round of the playoffs. Jonathan Stewart is practicing, so Whittaker’s status doesn’t hurt the Panthers too much.

Lyle Sendlein, Cardinals center—Sendlein started all but one game this year and has been apart of a potent Cardinals offense that finished the year second in passing yards per game and eighth in rushing yards per game. The Cardinals’ offensive line allowed 27 sacks on the year, tied for fourth best in the league.