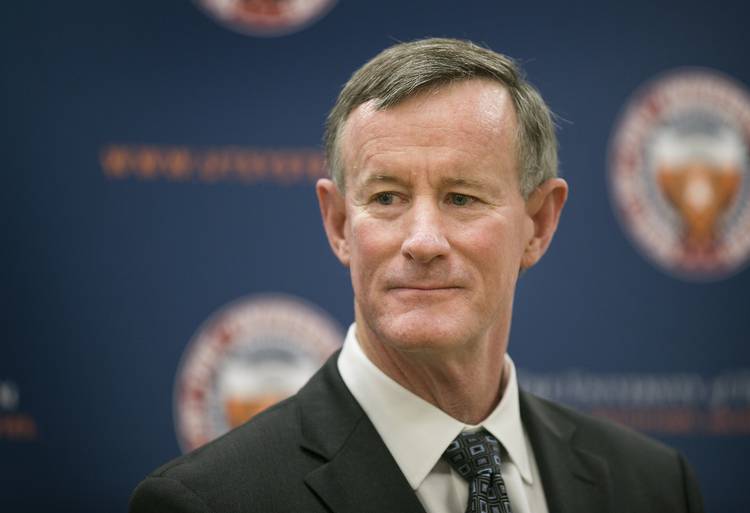 A bit less than a year into his chancellorship of the 14-campus University of Texas System, Bill McRaven sketched out his vision and mission for the system Thursday, November 5, 2015, before the Board of Regents. LAURA SKELDING/AMERICAN-STATESMAN

It’s hard to imagine anyone who loves his country more than University of Texas System Chancellor Bill McRaven.

The retired admiral and Navy SEAL directed the raid that killed Osama bin Laden. And last year, McRaven said he can think of “no nobler calling” than serving at UT.

Last Wednesday, McRaven sent a memorandum to all presidents and athletic directors within the UT System encouraging all coaches and players to honor the American flag before any athletic event.

“I would ask that you encourage your coaching staff and your players to stand up straight when the National Anthem is played; to face the flag and place their hand over their heart as a sign of respect to the nation,” McRaven wrote in a letter obtained by the American-Statesman through UT officials.

“It is a simple act but I believe it will have a lasting effect on those that see it, and on the student-athletes of whom we are all so proud.”

Most college administrators steer clear of politics, as they want to foster open discussion on campus. “Honoring the flag does not imply that the republic for which it stands is perfect,” McRaven wrote. However, the flag is “our collective commitment that we will constantly attempt to get better as a nation.”

McRaven wrote that “the values we hold so dear seem to be under constant assault.” Thus, it’s more important than ever to show respect to the American flag, he wrote.

“Additionally, in this age where many young athletes learn their behavior from watching those in the college ranks, what better lesson can we teach them than to respect the flag and the people it represents?”

The memo ends simply, “Thank you!”