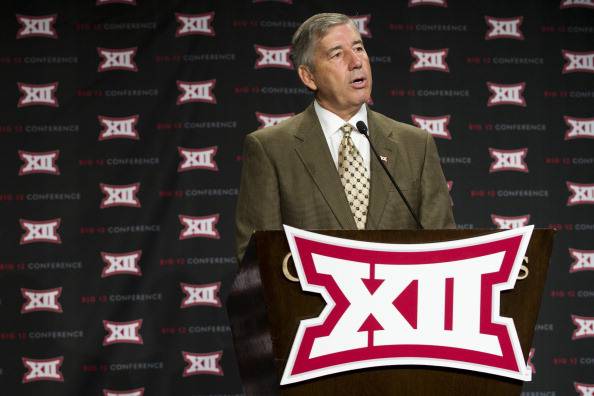 The Big 12 could soon hold a football championship game next season. And it sent the reporters who cover the Big 12 weighing in.

The Big 12 being allowed to have a conference title game in football with 10 teams doesn't mean it will happen. Just means it's an option.

I would love for the Big 12 to expand to 12 schools by adding Louisville and maybe BYU. Those are new TV sets which means new revenue.

Houston is an exciting program with Tom Herman on the scene but Texas already has the TV sets in Houston. That doesn't create new money.

Bowlsby would not speculate about the Big 12 will actually have a championship game next season. "It's too early," he said.

A good thing about a title game: The Big 12 wouldn't be idle while other schools were playing in title games in December.

TCU AD Chris Del Conte on vote: "It gives us more data to discuss. But can't say we will have game. It arms us with another data point."

Having a conference championship game pure speculation. TCU's Chris Del Conte: "It's like saying. If I win lottery, I'm going to do this."

Those hoping Big 12 would be prompted to expand in the near future, well, vote was bad news. Next, league will debate merits of title game

Fan question: Do I really want to spend money to see a Big 12 title game in Arlington or KC when my team could be in CFP semis/final?

There's no guarantee the Big 12 athletic directors will vote a championship game in. #NCAAConv

Also, unclear how top 2 teams will be determined since Big 12 doesn't have divisions.#NCAAConv

Statement from Greg Fenves, Mike Perrin on Big 12 vote: "This vote opens up a lot of possibilities that we need to look at closely." 1/2

More Fenves/Perrin: "We're looking forward to speaking with Commissioner Bowlsby and the other Big 12 schools about it." 2/2