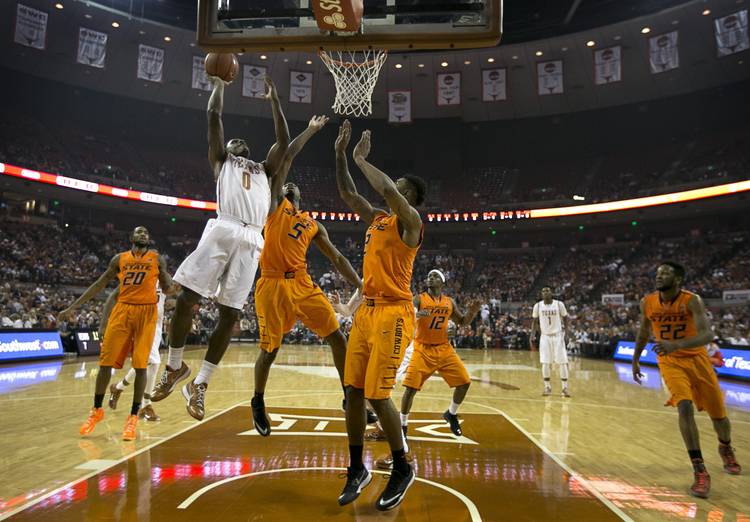 UT's Kendal Yancy goes up for a shot against OSU's Tavarius Shine in the first half at the Frank Erwin Center on Wednesday February 4, 2015. JAY JANNER / AMERICAN-STATESMAN

After the biggest Big 12 win of Shaka Smart’s tenure at Texas, the Longhorns’ first-year coach is looking for his first Big 12 winning streak this weekend. To do that, he’ll have to beat Oklahoma State, which travels to Austin for a 5 p.m. Saturday showdown at the Erwin Center.

Texas leads the all-time series 46-41, and the two programs have combined for some of the best games in Big 12 history, arguably one of the best ever.  This is has been a matchup of ups and downs. In 2006, Texas beat Oklahoma State 80-46 in the first matchup but lost 81-60 in the second.

Here are five memorable Big 12 Texas-Oklahoma State games from the past:

We mentioned this game a few weeks ago, but here it is again:

This lopsided game is included because it was the Big 12 Tournament championship game in Dallas. Oklahoma State was ranked No. 7 at the time and was led by future NBA players Tony Allen, John Lucas and Joey and Stephen Graham. P.J. Tucker, Royal Ivey, Brad Buckman and Brian Boddicker led Texas that season to a 25-8 record, No. 3 seed in the tournament and the Sweet 16.

But they couldn’t beat the Cowboys for the Big 12 tournament title.

Another Big 12 Tournament game, this time it was Texas’ opening game at Kemper Arena in Kansas City. Texas avoided a tournament letdown by surviving a grind-out game against legendary coach Eddie Sutton’s Cowboys. Maurice Baker of OSU scored a game-high 20, but Texas got a combined 33 from Chris Owens, Maurice Evans and Darren Kelly.

It was senior night at Henry Gallagher-Iba Arena, but unranked Texas played spoiler against No. 8 Oklahoma State. Brad Buckman scored 27 points in the game, but it came down to Oklahoma State’s Terrence Crawford missing the second of three free throws with .3 seconds left in the game that gave Texas the win. The John Lucas-led Cowboys would go on to reach the Sweet 16 that season.

The first time these two program met in the Big 12 Tournament, Texas came away with a win over then No. 25-ranked Oklahoma State. This was Tom Penders’ last Big 12 win and his last win at Texas before being replaced by Rick Barnes. Standouts like Desmond Mason led Oklahoma State, and even commentator Doug Gottlieb was on that team. Texas was led by local product Chris Mihm, who was one of five freshmen on the team.

Other games we considered: