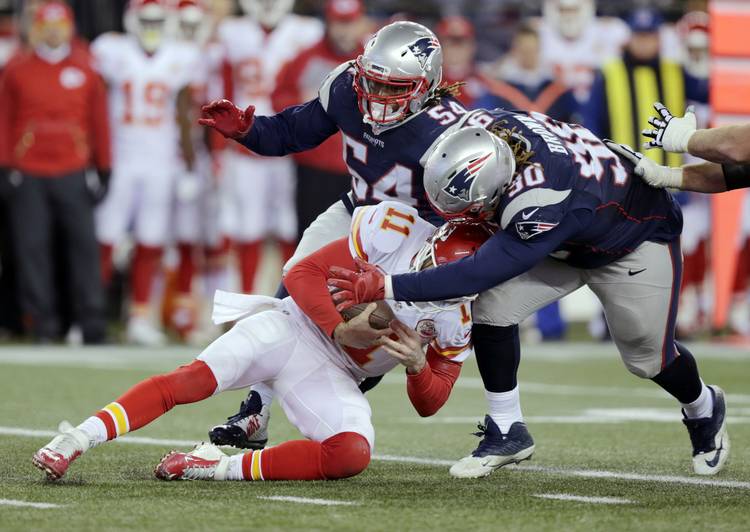 Malcom Brown has had at least five tackles in each of the last three games. (AP Photo/Charles Krupa)

Is there such a thing as a former Longhorn? These players will always be Longhorns to University of Texas fans, even though they’ve graduated to the next level of football. Every Tuesday, we’ll update you on how they performed the previous weekend. Here’s a look at the Longhorns in the NFL and how they fared in the divisional round of the playoffs.

Malcom Brown, Patriots defensive tackle—Brown, who checked in at No. 5 in our Longhorns in the NFL rankings, had five tackles in the Patriots’ 27-20 win over the Chiefs on Saturday and he’s becoming a real force on the defending champions’ defense. He’s played in every game this season and saw his playing time increase, avoiding the dreaded “rookie wall.” He’s started the last twelve games for the Patriots and has had at least five tackles in each of the last three games. He’ll travel to Denver with his Patriots to see if they can defeat the Broncos to return to the Super Bowl yet again. The Patriots lost to the Broncos in overtime earlier this season in Denver. Brown made four tackles, two for loss and sacked Brock Osweiler in that game. He’ll face Peyton Manning this time around, who is clearly less mobile.

Lyle Sendlein, Cardinals center—Sendlein blocked defensive tackle Mike Daniels just long enough to allow Larry Fitzgerald to make the game-winning touchdown on a shovel pass in overtime of the Cardinals’ 26-20 victory. The Cardinals managed just 40 yards rushing on 19 carries, but the offensive line protected Carson Palmer well enough for him to throw for 349 yards and three touchdowns. Sendlein and the Cardinals will now travel to Charlotte to face the Panthers in the NFC championship. Sendlein is going for his second Super Bowl appearance since entering the league. He started for the Cardinals in Super Bowl XLIII in 2009 when Arizona lost to Pittsburgh 27-23 on a last-minute touchdown.

Earl Thomas, Seahawks safety—Thomas seemed to be just short of making some big plays during the Seahawks’ 31-24 loss to the Panthers. After Jonathan Stewart’s 59-yard run to start the game, Thomas was in position to recover a Cameron Artis-Payne fumble on the second play from scrimmage, but he was blocked just before he could attempt a recovery. On the Panthers’ third touchdown, Stewart stretched the ball over the goal line just before Thomas could attempt to strip it away. The Seahawks found themselves in a 31-0 hole at halftime, but Thomas and the defense held a conservative Panthers offense scoreless in the second half.

Derrick Johnson, Chiefs linebacker—Johnson had four tackles in the Chiefs’ 27-20 loss to the New England Patriots. The loss put an end to the Chiefs’ amazing 11-game winning streak. Johnson finished the postseason with ten tackles. He had 116 tackles, four sacks, two forced fumbles and two interceptions in the regular season. He’s an unrestricted free agent, so we’ll see if he continues to play for Kansas City once we hit the offseason. He’s 33 years old, but he had a great season coming back from a torn Achilles’ tendon.

Jamaal Charles, Chiefs running back—The Chiefs’ regular starter has been out for most of the year with a torn ACL. Without their leading rusher, the Chiefs managed to outperform their numbers as both Charcandrick West and Spencer Ware stepped up nicely. But make no mistake, Charles will be the Chiefs’ main man at the start of next season.

Cory Redding, Cardinals defensive end—Redding, unfortunately, was put on injured reserve with an ankle injury, so he’ll miss his opportunity to contribute during the rest of the playoffs as his Cardinals moved on to the NFC championship. Redding had dealt with the injury for a while and hurt it again in the regular season finale.

Alex Okafor, Cardinals linebacker—In a bizarre twist, the starting linebacker ended up on the non-football injury list with a toe problem before Saturday’s game. What’s known is that he hurt it during the Cardinals’ bye week. What isn’t known is how he hurt himself. His teammate, Sean Weatherspoon, said, “somebody was that guy,” after explaining that head coach Bruce Arians urged players not to be “that guy.” Okafor was “that guy” back in March of 2015, when he was charged with evading arrest. His reasoning according to an arrest affidavit was he just needed to get to the Aquarium Bar, located on Sixth Street.

Fozzy Whittaker, Panthers running back—Whittaker didn’t play in Sunday’s win over the Seahawks, but he is slated to start practicing again on Wednesday. He had a high ankle sprain in Week 16 and has missed the last two games. The Panthers avoided disaster on their first drive of the game on Sunday when Artis-Payne’s fumble was recovered by teammate Mike Tolbert. Both should figure to play a role in the NFC championship game, but having Whittaker healthy would be a plus for Carolina.