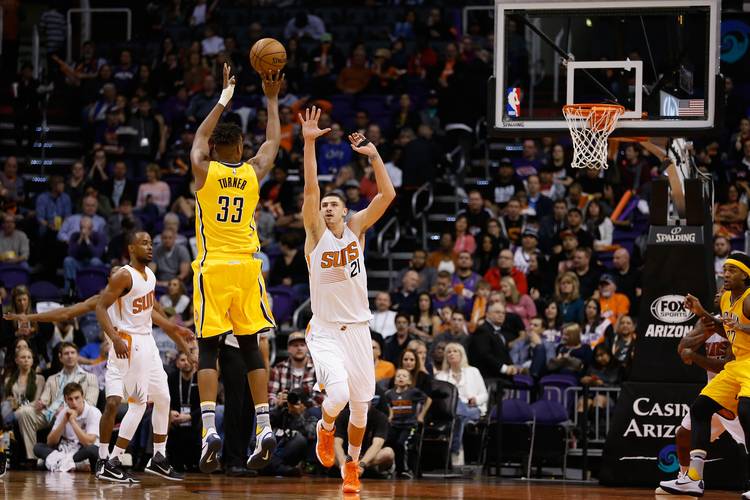 Myles Turner has picked up his game as of late, scoring 50 combined points in his last three games. (Photo by Christian Petersen/Getty Images)

Kevin Durant, F, Oklahoma City Thunder: Everyone is talking about the Warriors and Spurs most likely meeting in the Western Conference finals, but the Thunder have been playing really well, too. They’re on a six-game winning streak entering Thursday and have won 12 of their last 14 games. Of course, Durant is a big part of why they’re doing so well. He’s scored at least 20 points in every game he’s played in since November 23. He’s had two double-doubles since the last time we checked in. He scored 24 points and had ten rebounds in Sunday’s win over the Heat before scoring 30 and hauling in 12 boards against the Nuggets on Tuesday. In Friday’s win before that, he had 21 points, seven assists and six rebounds. He’s averaging 26.5 points per game, below his career average, but he’s improved in assists and rebounds so far this season. He averaging 4.4 assists per game, up from 3.6 in his career, and 7.8 rebounds per game, up from 7.0.

Myles Turner, F, Indiana Pacers: After having his minutes fall off recently, Turner has made his presence felt in his last three games. On Friday he scored ten points on 4 of 8 shooting in 18 minutes. On Sunday he scored a career-high 25 points, 12 of which came in the final period, to go along with seven rebounds and two blocks. He was 11 of 13 on that day. The Pacers lost both of those games, but on Tuesday they defeated the Suns 97-94 with the help of Turner’s 15 points, four blocks and four rebounds. He’s now averaging 7.4 points, 3.7 rebounds and 1.1 blocks per game.

LaMarcus Aldridge, F, San Antonio Spurs: His Spurs were in the midst of an 11-game winning streak heading into Thursday night’s matchup with the Suns. He was coming off a strong performance against the Mavs in which he scored 23 points to go with seven rebounds. He only had six points and eight rebounds in the Spurs’ narrow victory over the Cavs last week. Though Aldridge’s scoring is down from his career mark, he’s fitting in really well in San Antonio. He’s still at 16.1 points per game and has improved on his career-rebounding average from 8.4 to 9.0 boards per game.

Tristan Thompson, F, Cleveland Cavaliers: Thompson turned in a great game in the Cavs’ bid to end the Spurs’ winning streak last Thursday. He scored 18 points to go with 14 rebounds and a steal in the loss. He followed that up with another double-digit game against the Rockets when he scored ten in the 91-77 win on Friday. He, like many of the Cavs, had a very quiet night in the big 132-98 loss to the defending champion Warriors on Monday. The Cavs and Thompson bounced back on Wednesday, defeating the Nets 91-78 with the Texas-Ex scoring 14 points and collecting ten rebounds. He’s averaging nearly a rebound better (9.4) than his career average this season.

Avery Bradley, G, Boston Celtics: The Celtics had lost two in a row entering Thursday, but you can’t really blame Bradley. He scored 19 in each of those games against the Mavs and the Raptors. Before the two-game skid, Boston had won three straight. Bradley scored nine points and had four assists in the 119-117 win over the Wizards on Saturday after scoring 17 in the 117-103 win over the Suns on Friday. He’s averaging 14.6 points per game.

P.J. Tucker, F, Phoenix Suns: Entering Thursday, the Suns were in the midst of a five-game losing streak. Tucker has played as expected in that stretch, averaging 6.6 points per game, right at his career average. His best game came in a 97-94 loss to the Pacers in which he scored 12 points to go with ten rebounds. He also had five assists.

Cory Joseph, G, Toronto Raptors: Joseph matched a season-high 19 points in last Thursday’s 106-103 overtime win over the Magic in London. He also had four assists, three rebounds and two steals. He subsequently scored two points in each of the Raptors next two wins. He had six assists against the Nets on Monday. He’s averaging 8.4 points per game, up from his career average of 5.7.