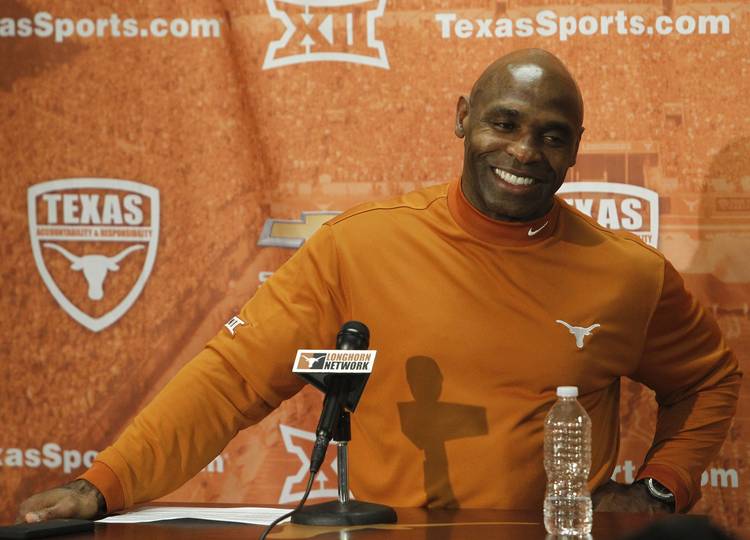 Charlie Strong’s first words to the media at his signing day press conference?

“It was a great day today. A great finish.”

And it was. Maybe the biggest signing day in UT history, when you factor in how far the Longhorns jumped Wednesday in the national class rankings and who they got — seven 4-stars on Wednesday alone, all on the defensive side of the ball, filling the critical need at defensive tackle along with potential big playmakers at linebacker and safety.

It all started with news coming from 2017, not 2016, when Westlake quarterback Sam Ehlinger told the Statesman that he’ll enroll early and be on campus next January. Texas began the day with 17 players in a class ranked 25th in the country, and by late afternoon, there were 24 players in a class that was shifting from No. 9 to No. 11.

Then Duncanville DT Marcel Southall picked Texas over Oklahoma and Miami. Followed by Euless Trinity DT Chris Daniels‘ announcement that he would sign with Texas over Oklahoma. Then the biggest gem of this class — Nacogdoches safety Brandon Jones, the top-rated safety in the country — chose the Horns over Texas A&M and Baylor. The one Austin-area signee, Manor OLB Erick Fowler, flipped from LSU to Texas, followed by a rapid succession of commitments: Alief Elsik safety Chris Brown, Aldine Davis linebacker Jeffrey McCulloch and Houston Westside DT Jordan Elliott, who had decommitted from Oklahoma earlier this week.

Add those to Tuesday’s pickups of Katy running back Kyle Porter, who was believed to be TCU-bound, and Southlake Carroll receiver Lil’Jordan Humphrey, and Strong ended up working his signing day magic for the second straight February.

In all, Strong brought in 32 players for official visits. He ended up signing 24.

Last year’s class also ranked 10th, and produced first-year impact players like Malik Jefferson, Chris Warren, Holton Hill, Kris Boyd, Patrick Vahe, John Burt, Connor Williams, Breckyn Hager and Michael Dickson. The Longhorns will need more of that from this group. The defensive tackles and offensive linemen have the best chances to get on the field, but don’t overlook those linebackers and Jones in the defensive backfield.

How did Texas do it?

Strong credited several factors: (1) He turned some of Texas’ current players into recruiters themselves — “Our best salesmen were our players,” he said. Players like Jefferson, Charles Omenihu and P.J. Locke III were front and center, starting a group text with recruits that continued through Wednesday. (2) He won the living room, identifying that one person in each recruit’s life with the inside influence, then working that parent, coach, friend, grandmother, whoever, so hard that he used the verb “attack.” “It’s all about finding who your decision-maker is, and I don’t take no for an answer”; (3) He involved UT faculty and administration during official visits, once calling Texas President Gregory L. Fenves to address parents’ concerns and questions, once having a faculty member come in on a Sunday to talk academics; (4) And he didn’t dip into negative recruiting — or so he said. “There’s no need for us ever to talk about another university. I can only sell you what’s here at the University of Texas, and what you can do here and what a degree from here will do for you.”

Shane Buechele, QB: “He’s got two sisters at Oklahoma. On that visit, at breakfast they cam down and said, ‘Coach, can we take a picture with the Hook ’em down? And I said no, we’re not going to take that picture.’ But they were so proud of their brother. Shane is so eager to learn. He’s here right now. Always around the offense. Always around Sterlin (Gilbert, offensive coordinator).

Kyle Porter, RB: “He didn’t want to do anything (on his visit). That’s just who he is. I told him we can go back to the hotel and we’ll watch the (Texas) basketball game. He said really? I said really. But I said listen, don’t call me unless you’re calling me to commit. The phone rings on Tuesday and it says ‘Kyle Porter,’ and I was in a meeting and I said, ‘Oh, this is gonna be interesting.'”

Lil’Jordan Humphrey, WR: “He probably has the best name of them all.”

Collin Johnson, WR: “His dad was a great, great player here. He knows only one speed.”

Peyton Aucoin, TE: “I told him today, you stuck with us the whole time; you committed early. He’s a really good blocker who can allow us to run the ball.”

Jean Delance, OT: “He’s so athletic. So light on his feet. He can do a lot of things at the tackle position.”

Tope Imade, OG: “I go in and see him, he was so excited, he walked into the coach’s office and said, ‘It’s really you, coach.’ I said yeah, unless it’s some ghost. He brought in all his friends.”

Erick Fowler, LB: “He’s the one that shocked everybody today. He’s a guy we can move around. Can play outside, inside, get his hand down and go rush. … I told his mom about the best place to eat, and I love Cracker Barrel, but I told his mom that I don’t normally go back for seconds, but I went back for seconds on the pancakes.”

Andrew Fitzgerald, DT: “I say this guy right here will be the dark horse of this class. Talk about a guy who goes hard — he goes hard all the time. He has just one speed. And he’s fun to watch.”

D’Andre Christmas-Giles, DL: “It was eight questions every night with him — what position, coach? What number can I have? I told him I can’t wait to get you to Texas.”

Chris Daniels, DL: “The day before he committed to Oklahoma, I called him and told him I’m going to keep recruiting you, and it’s going to be hard to tell me no, and we’re going to flip you somehow.”

Eric Cuffee, CB: “A corner, but he can play safety, can play nickel, can do a lot of different things for us.”

Chris Brown, DB: “I told him the thing I like about you, you have a chip on your shoulder, and you’re going to prove to everyone how good you are.”

Brandon Jones, S: “It was important for us to get into East Texas. This is really, really an unbelievable player for us. I called (Jeff) Traylor probably at 12:30 or 1 last night, and he said, Coach, I don’t know if I can sleep tonight.”