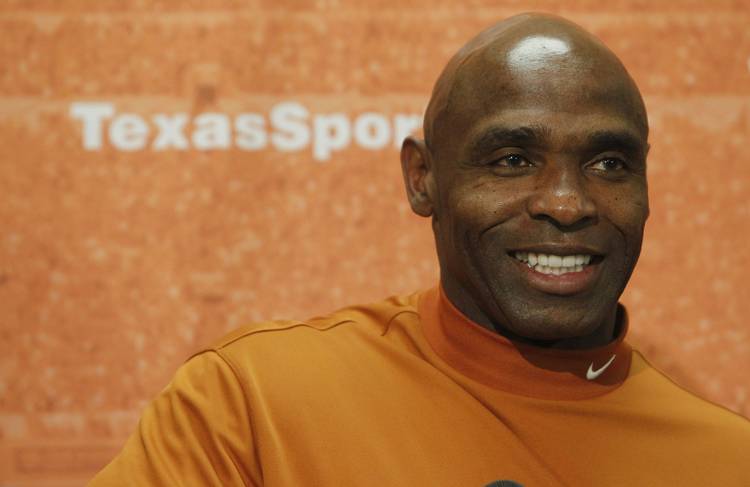 Today’s the day! National Signing Day could prove to be explosive for the Texas Longhorns and coach Charlie Strong. We’ll update this blog by the minute with the latest Longhorns developments from social media and our staff’s reports.  And make sure to check our National Signing Day primer so you know what to expect. (But we’re hoping for a few surprises, too.)

With 24 commitments, it appears Texas will finish with a top-10 recruiting class, regardless of website. Most have UT tops in Big 12.

1:15 p.m. : And unless something crazy happens, that should be it on 2016 Texas recruiting class, and people are happy.

And with Elliott's decision final, that should wrap up Texas' recruiting class. 24 total. (Photo from @SlaterESPN)pic.twitter.com/vUZMlZF0Zb

1:10 p.m.:  Dr. Lou’s grandson, Longhorn Trey Holtz, had to tweet about his grandpa doing the dab.

#Longhorns slip out of top 10, at least temporarily. 11th in 247Sports composite rankings of all top recruiting services.

Thank you, looking forward to it https://t.co/VrjhthPuP0

12:22 p.m.: Maybe Texas and Texas A&M should play each other, because the Longhorns are really loving how Texas’ recruiting class is beating the Aggies:

12:15 p.m.: In case you missed Jeffrey McCulloch‘s signing day moment on TV, here it is:

12:10 p.m.: People are really having fun with Jeffrey McCulloch‘s nickname.

12:06 p.m.: LSU will have the No. 1 recruiting class in the country, but Texas did steal one of their commitments.

That loud boom you heard from Louisiana was No. 27 Kristian Fulton picking #LSU and virtually locking up the No. 1 class on #SigningDay.

11:39 a.m.: Brandon Jones chose Texas even though a Texas A&M website made a documentary about him. True story.

11:20 a.m.: Chris Daniels excited that history is being made at Texas, but he better plug his phone in.

Had to go look myself 🐂🤘🏾History is being made in Austin #Believe #Hookem pic.twitter.com/3KVNNAdZ21

11:16 a.m.: Some recruits are starting to gloat about signing day, and they probably should.

11:06 a.m.: Everyone at Texas is feeling good today, then this guy had to be reminded Longhorns about Halloween, 2015. But he’s right:

Texas has picked up eight commits in the past two days. It'll grow to nine if DT Jordan Elliott picks the Horns at 1 p.m.

WHEN WILL TEXAS STOP? pic.twitter.com/3sb2cjJi40

10:28 a.m.: Erick Fowler and the Longhorns have the LSU tigers in their future.

Manor LB Erick Fowler of #Longhorns will have chance to play #LSU in 2019 to see if he made right choice by backing out of his commitment.

10:04 a.m.: One of the best defensive backs to ever play at Texas is chiming in on this signing day as Brandon Jones is coming to Texas.

Not dodging anything. Charlie is killing it today. Having a super finish. https://t.co/eadZC3oUsN

10 a.m.: Our hourly update, Texas continues to climbs up recruiting rankings, and is now tops in the Big 12.

It's almost 10 a.m. Texas now has 21 commits, the No. 1-ranked class in the Big 12 and serious momentum. McCulloch, Elliott still out there.

Not a huge reception when Elsik ILB Dontavious Jackson announced to Florida State. Texas missed out there. Still a big day in Austin.

9:55 a.m.: Even though Jackson didn’t also come to Texas, is dominating signing day and people are taking notice.

I would like to announce that I have also committed to the University of Texas. #letsride #blessed

9:50 a.m.: Dontavious Jackson bucks the trend, signs with Florida State instead of Texas. Teammate Chris Brown of Alief Elsik signed with Texas a moments ago.

#Alabama has already soared past #LSU into 2nd place in the 247Sports composite rankings, trailing only The Ohio State University.

Texas LB Malik Jefferson on LHN: "It's very exciting. We want to see kids come here, want to lift this program and be excited."

9:30 a.m.: Recruits are having fun on this busy National Signing Day.

Not even halfway through the day, and #Texas and #Alabama running away with all of the national headlines. #Dominating #SigningDay

9:15 a.m.: Texas has soared up the national recruiting rankings today.

If Charlie Strong can close like this after 5-7 and 6-7 seasons, imagine his muscle when Texas starts winning games.

What did I say ? Told yall😎

8:55 a.m.: Erick Fowler is heading to Texas, switching from LSU to Texas on National signing Day.

8:52 a.m.: Texas loses out on Manvel safety Deontay Anderson, who is going to Ole Miss.

Texas now has nine recruits from the ESPN 300. Five committed in the last 24 hours.

It's a great day to be a longhorn and it's just beginning!! #LetsRide #Believe

Mack Brown asked on ESPNU if this is becoming a good day for Charlie Strong: "Think it's already been a real good day."

Nacogdoches five-star safety picks Texas over A&M and Baylor. That's a Malik-level get for Charlie Strong.

8:25 a.m.: Big announcement soon to be coming from Manor, Texas

8:25 a.m.: Coach Mack Brown pretty much owned signing day when he was at Texas.

8:20 a.m.: D’Andre Christmas-Giles makes it official, his paperwork is in.

8:15 a.m.:  That’s so Tope. Tope Imade makes it official by signing with Longhorns.

Trinity DT Chris Daniels to Rivals: "A lot people that are silently committed, a lot of people who are committed."

8:04 a.m.: A huge get for Texas as Euless Trinity’s Chris Daniels is headed to Texas.

And it's Texas for Euless Trinity DL Chris Daniels pic.twitter.com/PBU9jaT6ZE

Horns had their fingers crossed on this one. https://t.co/pCDKg64kt1

7:40 a.m.: Manvel’s Reggie Hemphill-Mapps has signed his letter of intent, check out his thoughts on the Longhorn football.

Texas confirms that Peyton Aucoin, Denzel Okafor and Reggie Hemphill-Mapps have all sent in their LOIs.

7:30 a.m.: We have our first set of signings! Tight end Peyton Aucoin makes it official:

7:15 a.m.: Southlake Carroll product Lil’Jordan Humphrey committed to Texas this past weekend, but this morning he made it official.

7:15 a.m.: Obi Eboh was committed to Texas up until last month. The Southlake Carroll defensive back signed this morning with Stanford.

Congrats @Obi_Eboh3 on #NSD2016. Honor to coach you & Dragon Nation is proud of you! #NerdNation #GoStanford pic.twitter.com/2JknSMAZxz

7:00 a.m.: Deonatay Anderson is signing at 9 a.m., and he’s thinking about his upcoming decision:

6:45 a.m.: The Longhorns are up and ready for National Signing Day, so says first-year graduate assistant Jordan Traylor.

7 months until kickoff. The Horns are up early to train so we can see who is choosing THE University of Texas today. #believe #TXfast

6:35 a.m.: Texas target Dontavious Jackson has started his day and is already thinking about the future. Jackson will commit around 9 a.m.