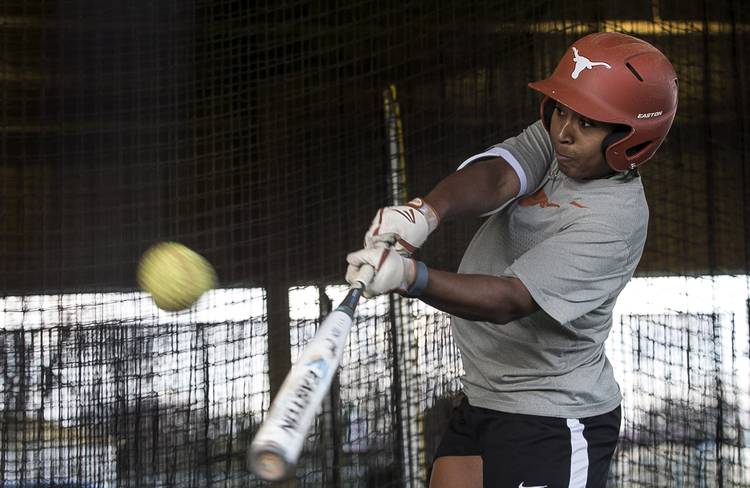 Texas senior, (13) Lindsey Stephens, works out in the batting cage during the first day of Texas softball practice held at the University of Texas Red and Charline McCombs Field on Thursday, Jan. 14, 2015. RODOLFO GONZALEZ / AUSTIN AMERICAN-STATESMAN

Texas senior Lindsey Stephens has been put on the 50-player USA Softball National Collegiate Player of the Year watch list.

It’s the second year in-a-row the outfielder from Beaumont has been placed on the preseason list.

The honor has been given to the top player in the country for the last 15 years. Texas is the only softball program in the nation to have a player win the award more than twice. Two-time Olympian Cat Osterman won the award in 2003, 2005 and 2006.

Stephens was an National Fastpitch Coaches Association All-Central Region and All-Big 12 selection as a junior. She finished the 2015 season with a .343 batting average and had team-highs of 44 hits, five triples, 14 stolen bases, 15 home runs and 37 RBIs.

The list will be narrowed down to 25 semifinalists on April 13 and 10 finalists will be announced on May 11. The winner will be revealed on May 31.

The preseason watch list includes 25 seniors, 15 juniors and 10 sophomores. Freshman are ineligible for the watch list, but are eligible to win the award. A player does not have to be on the list to be considered for the award.

But really, what does Matthew McConaughey think about Texas’ recruiting class?

How does Texas’ 2016 recruiting class stack up against the 2016 schedule?