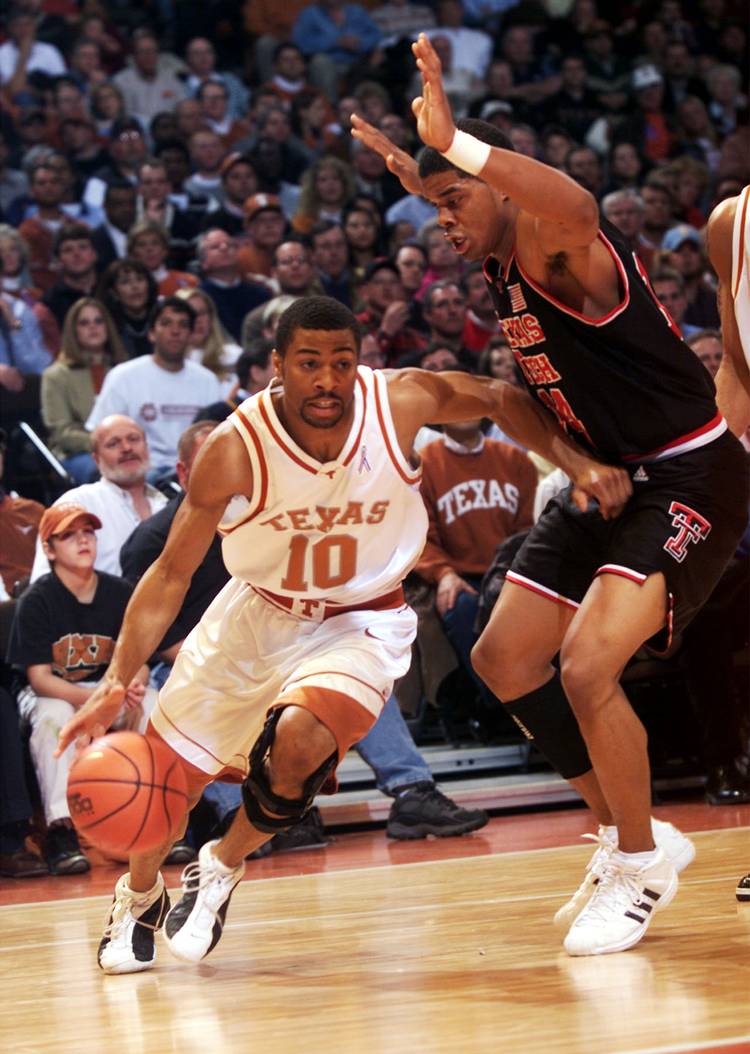 No. 10 Redie Williams of Texas drives toward the net against No. 14 Andre Emmett of Texas Tech in the first half of play at the Frank Erwin Center on Feb. 26, 2002. (Sung Park/American-Statesman)

The Longhorns have reeled off three impressive wins in a row, including a Big 12 win over No. 15-ranked Baylor on Monday that had Fran Fraschilla very excited about Prince Ibeh.

It’s been a month since our own Kirk Bohls was putting this year’s Longhorns in the NIT. But don’t blame Kirk; the Longhorns had lost to current last-place TCU and … Texas Tech to start Big 12 play.

Well, Texas hosts Tech at 1 p.m. Saturday, and the Longhorns look like a completely different team than the one that lost 82-74 in January. The Horns have an 82-55 all-time record against the Red Raiders, and the last game snapped a three-game winning streak over Tech.

James Thomas hit two free throws with 6.9 seconds remaining in overtime to seal a win over the Longhorns as Texas, which went to the Sweet 16 this season, beat Tech (13-2 entering the game). Texas coach Rick Barnes improved to 7-0 against the Red Raiders all-time, and he did it with three Texas players scoring 18 points apiece (T.J. Ford, Brandon Mouton and Thomas).

This could be one of the most puzzling losses in the Rick Barnes era, looking back 13 years later. The 2002-03 team is generally considered as the most successful basketball squad the Longhorns have fielded possibly ever. They had the Wooden and Naismith award winner (T.J. Ford), and they went to the Final Four and finished 22-6 in the regular season en route to a second-place finish in the Big 12. They earned a No. 1 seed in the NCAA tournament.

And Rick Barnes had never lost to Texas Tech as the Longhorns’ coach.

But in the opening game of the Big 12 Tournament, Bob Knight’s Red Raiders scored an 11-point win.

The best thing about this game was reading the Red Raiders’ press release and it starting with:  “Bob Knight gave back his salary because he didn’t like how Texas Tech played in the regular season.” Andre Emmett, who before Perry Ellis played at Kansas for 50 years, was seemingly at Texas Tech for a lifetime, scored 30 points in the win.

T.J. Ford scored 23 in the loss for Texas as the Longhorns’ only lead in the game was 2-0.

But hey, I guess this just shows how meaningful conference tournaments are, because Tech played in the NIT (it reached the semifinals) and Texas went to the Final Four.

The very next meeting these two teams had following Tech’s Big 12 Tournament upset was this thriller in Lubbock.

The Longhorns used a Brandon Mouton game-winning 3-pointer at the buzzer as No. 16 Texas beat No. 13 Texas Tech on the road in overtime. It snapped a 12-game winning streak by the Red Raiders.

Andre Emmett (again, Emmett was seemingly at Texas Tech long enough to have seen the 1930s King Kong movie, the 1970s King Kong remake and the 2005 King King remake in the same Lubbock movie theater) was kept scoreless for most of the first half despite entering the game as the Big 12’s scoring leader.

A new Knight, a different upset.

So, Texas went to the Elite Eight in 2008. The Longhorns lost to Memphis in the regional final, had a No. 2 seed in the tournament and went 31-7 that season. Tech had lost by, no joke, 44 points the game before playing Texas at home on this Saturday. And somehow, even without Andre Emmett on the roster, Tech pulled off the upset against No. 5-ranked Texas.

Red Raider head coach Pat Knight, son of former Tech coach Bob Knight, changed up practice that week, and it must have worked.  Alan Voskuil had 18 points in the game, and that was enough for the Red Raiders to overcome 30 points from D.J. Augustin and 14 from A.J. Abrams.

Here’s the video of the finish and the Red Raider court storming.

Rick Barnes was feeling the heat.

He was 0-2 in the Big 12, having lost to Oklahoma and Oklahoma State to start conference play, and many people were predicting the end was coming for Barnes at the end of the season.

But this three-point win over Tech at home started a seven-game winning streak that would include wins over ranked teams Kansas, Baylor, Kansas State and Iowa State (truly one of the more impressive runs a program has made since the conference moved to the round-robin schedule).

Cam Ridley made a memorable play at the end of the game when he blocked a shot, ran the floor, grabbed an offensive rebound, got fouled and hit two free throws to give Texas a 65-64 lead with 31 seconds left.