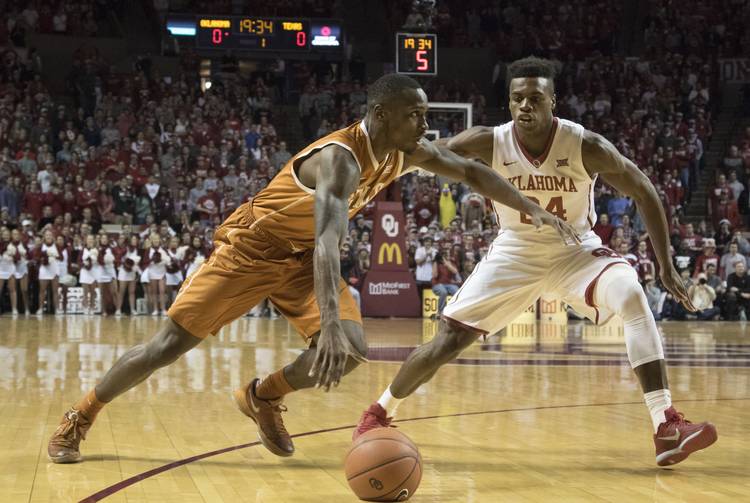 Texas guard Kendal Yancy drives around Oklahoma's Buddy Hield as he looks for a shot during the first half Monday at Lloyd Noble Center. (Photo by J Pat Carter/Getty Images)

NORMAN, Okla. — Oklahoma guard Buddy Hield scored nine points down the closing stretch and then saved his best for last.
Hield, the Big 12’s most dynamic play-maker, drained a 3-pointer with 1.4 seconds remaining to make the difference for No. 3 Oklahoma in a 63-60 win over No. 24 Texas.

The Longhorns had a chance at the go-ahead basket, but Isaiah Taylor was called for an offensive foul with 17 seconds left. In a game where a ton of pushing and shoving was not called, it was an odd time for that whistle.

Hield scored, giving him a game-high 27 points, and Texas coach Shaka Smart quickly called timeout. But Connor Lammert’s inbound pass was picked off by, who else?, Hield and the Sooners escaped Lloyd Noble Center with a win.

“There’s a reason why he’s the best player in the country and makes plays,” Smart said. “I thought our guys, for most of the game, did a really good job on him, given how good of a player he is. But down the stretch, he really was aggressive and got to the foul line and obviously hit that big shot.”

Kendal Yancy couldn’t have asked for a better start. He sank a baseline floater, hit a 3-pointer from the left wing and then another 3-pointer, giving Texas an 11-3 lead. At one point. he hit a eye-popping bank shot in the middle of the lane. Yancy had a season-high 13 points by halftime and that’s where he finished.

Playing tight man-to-man defense is critical against one of the nation’s best scorers. But it helps if he has an off night, too. OU’s Buddy Hield was 1 for 6 shooting in the first half and managed only six points. The real key was Texas didn’t let all three of OU’s guards go wild. Hield finished with 27 points and Isaiah Cousins had 17. But OU’s third scoring threat, Jordan Woodard, had only three.

Numerous times this season, Isaiah Taylor has come out of the halftime break and taken games over. That’s how he finished with a career-high 35 points against Texas Tech. He tried to take over in the second half against OU. Taylor went for numerous dribble drives, getting 14 points after the break. His scintillating drive, layup and foul on Hield with 3:30 remaining was highlight-reel worthy. That gave Texas 57-51 lead.

Under most circumstances, going 7 minutes, 36 seconds with only two points is a recipe for disaster. That’s what the Horns did in the first half, Prince Ibeh’s driving layup gave UT a 13-3 lead with 16 minutes before halftime. Then, the Horns would make only one of their next 12 shots. Ibeh’s dunk finally stemmed the bleeding. Fortunately, OU started the game 2 for 10 and still trailed 17-13 with 8:24 left before the break.

No rest for the weary. Texas gets back on a plane and heads to Ames, Iowa, for a Saturday night date with No. 14 Iowa State. The Longhorns and Cyclones had a fantastic matchup in Austin. Isaiah Taylor scored a game-high 28 points as Texas captured a 94-91 overtime win. That kickstarted UT’s run of winning seven of its eight games. Tipoff is 7:30 p.m. from Hilton Coliseum.