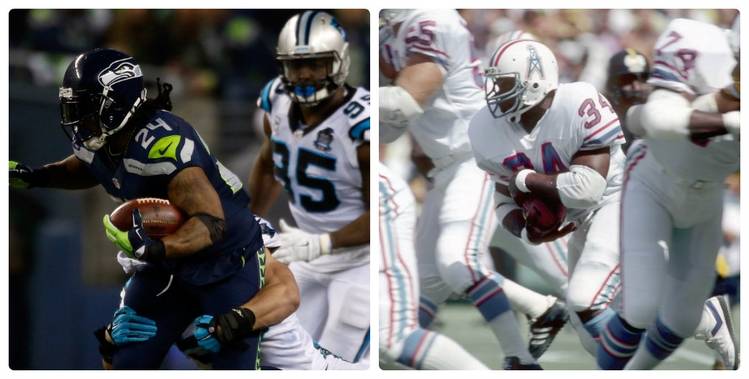 Uncanny comparison to Earl Campbell has us considering if Marshawn Lynch is worthy of the Hall of Fame.

During the fourth quarter of Super Bowl 50, as the Denver Broncos were in full control of the Carolina Panthers, Marshawn Lynch tweeted this photo.

It appears the running back will hang up his cleats, putting a cap on a great career. In fact, some might argue that it’s a career worthy of the Hall of Fame, especially if you compare his numbers to an all-time great hall of famer.

When comparing Marshawn Lynch’s career stats to Earl Campbell’s, one is struck by the eerie similarities. When judging a career as worthy of the hall of fame, however, there are other factors to consider.

On the positive side for Lynch, he does have a Super Bowl championship after playing in two of them. That’s one thing he has on Campbell.

But consider these career highlights for The Tyler Rose:

Oh, and then there’s the eye test:

Lynch is also a five-time pro bowler and has led the league in rushing touchdowns twice, but the regular season similarities end there. Lynch has never won a rushing title, has never been named MVP and has been named First-Team All-Pro just once. Add to that, Lynch played one more year than Campbell.

If Lynch does make it into the Hall it will be on the strength of his postseason performances. He has 937 yards rushing in the playoffs, that’s 8th all time. Of the seven running backs ahead of him on that list, only Terrell Davis isn’t in the Hall of Fame. Lynch also has six 100-yard rushing games in the postseason, which is tied for third all time. Campbell only played in six playoff games, totaling 420 yards rushing and four touchdowns.

So what do you think? Did Beast Mode have a better career than Earl Campbell? Should Lynch be in the Hall of Fame with The Tyler Rose?