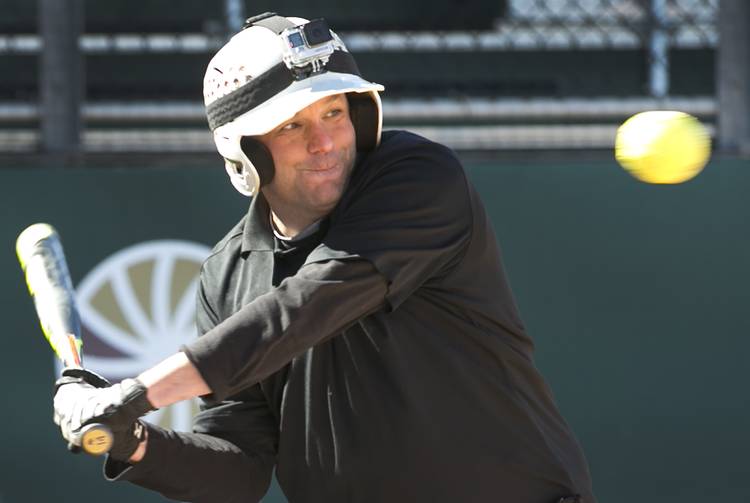 Austin Community Newspapers reporter Michael Adams tries his luck against former Olympic Softball Gold Medalist Cat Osterman, now assistant coach for the Texas State University Bobcat softball team, who was part of a fan appreciation day at their stadium in San Marcos, TX. Season ticket holders got to try and hit a homerun off the all-time strike-out record holder to win a free season pass. No such luck as not one person registered a hit in fair territory. Adams struck out in his at bat. RALPH BARRERA/ AMERICAN-STATESMAN

When I learned of this chance to hit against the Longhorn great, I sent a quick email to my contact in the Texas State athletic department to see if it would be possible to test my skills, or lack thereof, to find out what it’s like to face a world-class softball pitcher.

Once I got the OK, I solicited advice on Twitter from Osterman’s long time catcher Megan Willis, who gave a subtle hint I had no chance.

I arrived in San Marcos around 11:30 on Saturday to do a quick interview with Texas State sophomore pitcher Randi Rupp, Osterman’s star pupil, about the mechanics of hitting a pitch from a softball player. At the end of the interview the  2015 Sun Belt preseason pitcher of the year told me that she had no faith in me making contact on a pitch.

To be honest, I didn’t either.

With the interviews out of the way, my nerves about being in the batter’s box against Osterman were really in full swing. My stomach felt so hallow as I wondered if this is exactly how many batters felt when they knew they had to face the two-time Olympian.

As I walked to home plate with a full at bat, I looked to the pitching circle thinking that this may not be as hard as I think.  There was a sudden calmness that overcame me. I couldn’t hear anything but the thoughts in my head. The players in the outfield of Texas State’s beautiful facility were invisible.

Then Osterman whirled a fast ball at me on the first pitch. The calm ended with a loud pop from the sound of the ball hitting the mitt of catcher Sarah Rupp.

I laid off the next pitch hoping that I could figure out some sort of timing. Luckily it was a ball.

On her third pitch, Osterman threw her trademark rise ball. The experience of seeing this pitch from the eye of a batter is remarkable. The ball looked like it’s coming straight down the pipe, but cut upward long after I made the commitment to swing.

Facing my final strike, I took the fourth pitch, which may or may not have been my third strike. It was ruled a ball for ball two.

Osterman then hurled a fast ball that looked like it was coming at me at 100 miles per hour for my third strike.

I walked away from the plate not feeling like a failure. After all, there’s plenty of softball players way more experienced than I am that has suffered the same fate as me.

Osterman retired from playing  in the summer. She will be 33 in April, but I have to wonder if the Longhorn great doesn’t have enough gas in the tank for one or two more professional seasons.

Watch: Tour the Forty Acres in the ’80s